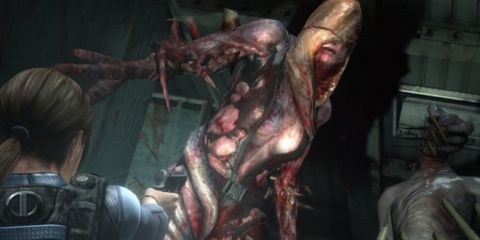 It feels good to be afraid again. Survival horror on consoles seems to have taken an unwanted detour into action territory as of late; Dead Space 3 and Resident Evil 6 come to mind. So it's refreshing to dive into Resident Evil: Revelations, the HD-ified version of the 3DS original that emphasizes tense claustrophobia and terrifying moments over mindless monster-blasting. If you've already beaten the handheld version, or you're not a fan of creepy hallways crawling with abominations, this port isn't required playing. But for those curious about what they missed in 2012, this is the prettiest way to find out.

The primary players on this mission are fan favorite Jill Valentine and husky newcomer Parker Luciani, who have boarded the luxurious Queen Zenobia cruise ship to neutralize a bioterrorist threat. The ship seems abandoned, until you realize you're in the company of creatures mutated by the deadly T-Abyss virus. Completing your objective--let alone escaping with your life--will be a test of your fortitude in the face of grotesque monsters.

Whereas the earlier RE games prioritized zombies, and recent entries revolved around the alien-looking Las Plagas parasites, Revelations makes excellent use of a new angle: freakish human/sea-creature hybrids. In place of the mundane undead, you'll be unloading clips into slimy, barnacled, tumor-covered mutants as they disturbingly lurch towards you. It's a fantastic spin for survival horror enemies, and the added detail in HD makes them all the more gruesome and intimidating. There's nothing quite as unsettling as wading through hip-deep water, unsure what might burst from the surface at any moment. The environments also do a good job of showing off the improved graphical fidelity, save for a few fuzzy-looking textures here and there.

You won't be pining for a Circle Pad Pro this time around, either; movement, aiming, and camera adjustment feel natural on a twin-stick console controller. The lack of a touch screen means that a couple late-game puzzles have been nixed, but you won't feel like you're missing much. Constant first-person room-scanning using the high-tech Genesis device does make a return, which both helps and hurts the ambiance in equal measure. It's satisfying to scan a corpse or trash can and find a much-needed ammo clip, but you might find yourself stopping every three feet to scan your surroundings, or reveal an item through a wall that you can't yet reach. It's also disappointing that scanning monsters provides no long-term benefit, past granting additional healing herbs.

Most of the time, you'll play as Jill, but the campaign utilizes a clever episodic structure to keep things varied. You'll warp back and forth between time periods and locations as you progress through the single-player story, stepping into the shoes of characters like Chris Redfield and Parker as they take point on their own missions. This constant shifting provides a welcome change of pace just when you want it, alleviating the tension of the chilling exploration and ammo conservation on the cruise ship with some brief guns-blazing, kill-'em-all action sequences. By separating the types of gameplay with bits of plot, you get all the benefits of variety with none of the jarring transitions.

Unfortunately, the early boss fights threaten the pacing with excessive challenge. It's one thing to anxiously pace through a dark locker room with your gun drawn, then spraying bullets in a panic when a monster bursts out from the air ducts above you. It's another to slam your head against a brick wall of difficulty in a room filled with infinitely spawning baddies and a big boss who will one-hit kill you if you move too close. These types of scenarios expose the flaws in the dodging system, which never really feels reliable--it's a survivability crapshoot. There are also dire repercussions for those that don't take the time to explore: missing out on much-needed weapons and upgrades. If you generally avoid backtracking, it's entirely possible that Jill may acquire a stockpile of shotgun bullets with no shotgun to fire them.

By the time you wrap up the 6-to-8-hour campaign, you'll be satisfied. It's a brief-but-thrilling ride through skin-crawlingly creepy exploration and big set-piece shootouts, with a few aggravating difficulty hurdles in between. The story's not half bad, either. Some of the characters and plot twists may be downright goofy, and the dialogue and attire from Chris' partner Jessica feels completely out of place. But Jill and Parker make a great team, and you'll be motivated to find out whether or not they live through their nightmarish tour of the Queen Zenobia.

There's no co-op for the single-player campaign; your only option in the way of multiplayer is Raid Mode, a two-player cooperative gauntlet through small sections of the game that feel like small-scale, time-attack sessions of horde mode. It's fun in short bursts, but it quickly turns into a grind for XP and new items. RE diehards may eat it up, but most players aren't liable to stick with it for more than an hour.

Though the asking price is a tad high, Resident Evil: Revelations is a worthy investment for those who miss the survival horror games of old or appreciate spine-chilling enemy design. It doesn't last all that long, and the wonky difficulty spikes early on may deter some players. But there's something refreshingly terrifying about staring down a faceless, leech-tongued shambler, or fleeing for your life from a razor-toothed water beetle that's as big as a sack of potatoes.