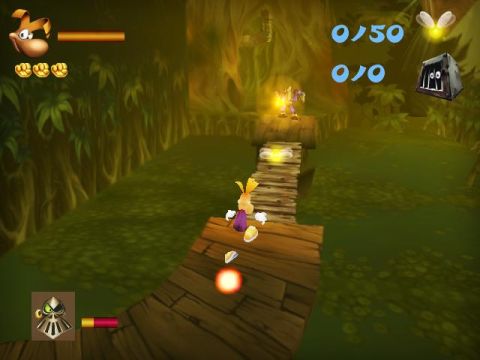 I first saw a pre-release box of this in a shop. I looked at the screenshots on the back and thought 'Oh good - this looks like Rayman 2'. Turns out, though, it is literally Rayman 2. You know, that game that's over a decade old and gets released on every system that's ever made? Uh-huh, it's that, with an added 3D effect.But don't just dismiss it because it's old. Or because it's got Rayman in it. It's actually, incredibly, still worthyofyour time. Here's why...

The game is a 3D platformer in the truest sense of the term. As the eponymous Rayman, you must run, jump, climb, swim and swing through a ten-hour main game, firing off shots of energy with your fist and using your hair like helicopter blades to slow your descent and get some extra length on jumps.

You can pick up some objects too. Powder kegs make for good bombs to attack enemies and open doors, but you can also hold them near a flaming torch and be instantly propelled forward on a makeshift rocket for a short while. Working out how you can use such items is simple. Working out how else you can use them to unlock secret areas is where the fun really comes in.

Your reward is often a handful of yellow lums. 1,000 of these hovering collectibles are scattered throughout the world. You need to find a set number in order to progress at various points in the game, but you don't need them all to see the end sequence.

Some of them are incredibly well hidden… too hidden in the case of the last cage in the Fairy Glade, which you can only get to through one of the other levels - not by playing the Fairy Glade stage at all (I used theGamesRadar iPhone Appto find this out - check it out if you haven't got it yet. It's free).Surely that's pushing the exploration mechanic a bit too far.

Above: There's one of the powder kegs with a handy torch nearby. Ride it like a rocket to grab that lum

The action is varied, with swimming, waterskiing, slope-sliding, running races and flying sections and the challenge comes from working out what to do rather than testing your thumbs' dexterity too much. It's well-paced too, with no section outstaying its welcome. In fact, it's all very pleasant to play. Even dying merely sends you back a little, so you're not penalised for getting jumps wrong too much.

Having been designed with N64's humble capabilities in mind, the visual style is commendably solid yet very flat-surfaced. Textures are more like paintings than the kind of normal-mapped roughness you get in most games these days. However, the pleasant surprise here is that this primitive level of geometric complexity actually looks fantastic with the 3D slider switched on.

Rayman's world is suddenly reinvigorated as the weird little mosquito thing comes out of the screen at you and floating platforms stretch away into tangible distance. With the depth slider anywhere more than a third up, it makes the world seem that much more real, like it’s an actual space you're playing in. And when you're underwater and Rayman's suspended in the middle of the screen with bubbles and fish all at different levels of depth into the scene, it looks nothing short of sensational.

Above: Who cares that the waterfall is just a flat, animated sheet? The overall effect is still lush and vibrant

In fact, this is one of the few games that extends the 3D effect out of the screen. The problem with this is that you literally have to go cross-eyed to see it, as if you were looking at a fly on the end of your nose (so to speak – that never happens really, does it?) - catch a long handrail at the wrong angle and suddenly it all goes wrong, as the image is so split, it's impossible to look at.

But for the most part, it's a good-looking game and one that, new tech aside, feels like it was designed to be played on 3DS, which is a minor miracle considering its age. As a launch game, it is incredibly lazy as it's full of missed opportunities. It doesn't use any of the 3DS' capabilities whatsoever. No gyroscope control, no Streetpass, no Spotpass, no touch screen functionality in-game… it doesn't even run as smoothly as the old Dreamcast version, which is frankly inexcusable for such an archaic game.

Above: OK, so this screenshot does look about a decade old. You'll have to take my word for it - it's still good

Given its age, price tag and technically lazy conversion, Rayman 3D shouldn't be very good. But the truth is, I had a really good time from start to finish, and even felt the urge to come back to it after the credits rolled to seek out those remaining lums. In 2D, it's a damn fine platform game. In 3D, it's a surprisingly good showcase for the hardware.Put them together and you've got by far the best modern version of the game, with better controls than iPhone version and better graphics than the old DS.

That said, I appreciate some people harbour a seethinghatred ofRayman, his stupiddismembered limbs and his even more stupid friends. But if you can bring yourself to give him a chance and accept that Rayman's purple buddy Globox is actually OK in small doses, you'll have a thoroughly enjoyable 10-15 hours of adventure ahead of you. Give it a try.