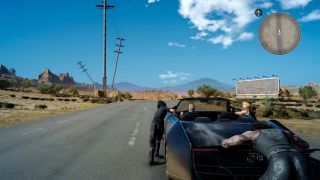 There's this tiny blink-and-you'll-miss-it town you'll drive through during your first couple of hours with Final Fantasy 15. After fixing up your car, your mechanic Cindy will ask if you could do her a solid and drop something off at the run-down (I'm sure the owner would prefer the word 'quaint') motel on the side of the road. You could ignore her request, drive on past, and head to the charming seaside villa where your next objective awaits. Or you could park your sick Audi convertible, hop out of the car, hand over the goods, then pop over to the local diner across the street, dodging oncoming cars like some kind of boy band Frogger. Play a game of pinball. Listen to the locals huff about some no-good monster messing up the outskirts of their podunk city. Buy a basket of delicious french fries.

It's a surprisingly chill beginning for a series known for explosive introductions. Final Fantasy 7 opens with an extended raid on a Mako energy reactor and a tour through a city that makes Blade Runner's Los Angeles look like a vacation spot; 10 begins with underwater soccer game backed by an early-aughts era butt-rock track, right before a giant space monster sucks the world's largest metropolis (and our hero) into its gaping maw. Final Fantasy 15's cold open begins similarly (no spoilers, but if you're interested, check out that 50-minute-long gameplay video from Gamescom below), but it's a fake-out. After a minute or two, the game fades to white, and suddenly, you find yourself pushing your car down a dusty freeway with your buds at maybe two miles an hour. It's slow, grounded, and it's totally by design.

"First and foremost, we really wanted to ensure that players will feel this thirst for adventure," Final Fantasy 15 director Hajime Tabata tells me through a translator when I asked him about how he plans to open up this series (which, on its best days, can be properly described as 'zany') to a wider audience. "It's difficult to really familiarize and get yourself into a world that starts off with full fantasy, which is why we started with something that was a little more grounded and realistic, so [players] can delve into this unknown territory."

This is an incredibly aspirational goal for a series that has spent much of its life being unflinchingly strange, and conceptually, Final Fantasy 15 is very similar to its predecessors in that way. The main character, Noctis Lucis Caelum (I know), son of King Regis and heir to the throne of the kingdom of Lucis (I know) which is home of the city of Insomnia (I know), is a pretty anime boy who looks like lead singer of a B-list J-Rock outfit. Kingdoms are at war, political gears are turning, crystals and magic coexist in a world with freeways and smartphones - but none of that matters right now. Your car is broken down on the side of the road, and apparently AAA service is spotty out in the boonies. Watching Noctis and his friends banter back and forth over who gets to drive and who has to push next is instantly relatable to anyone who's gone on a road trip and suddenly found themselves stuck in the middle of nowhere. It may not seem like a big deal, but for a series of games that spends no small amount of time on moon whales, a giant comic relief-spewing octopus, and an evil clone samurai with shoulder pads and mommy issues, seeing these moments play out is like stumbling on an oasis of humanity in the middle of a desert of strange.

In playing Final Fantasy 15's preliminary moments and taking on its first set of quests, you get whiffs of all kinds of different modern blockbuster games, which help ground its strangeness even further. "In terms of making the game accessible to a broad range of people," Tabata tells me, "we referenced games that did so, like GTA5 and Uncharted, which have wider open arms in bringing people in." And you can see some of that here. Fast travel points are plentiful and once it's fixed, you can summon your car whenever you want to help you get to major destinations; monster hunts give you some side quest opportunities that break from the main plot; a day/night cycle and wandering NPCs all create the sense that there is a vast world out there to explore that's full of life and opportunity. But all of that is contorted to fit Final Fantasy's peculiar approach to game design and world building.

Take crafting, for instance: in Final Fantasy 15's case, the 'minerals' you find in the environment are actually fire, ice, and lightning elements, which you can combine with other items to form powerful magic spells. For those of you getting flashbacks to Final Fantasy 8's cumbersome draw system, don't worry - you still have MP, which you use for your immediate combat abilities. FF15's magic and crafting is more for creating very powerful elemental grenades to use in a pinch, or against monsters weak against a specific element. It appears fleshed out enough that you'll be able to find some depth in exploring its combinations, but not so distracting that you need to drop everything you're doing all the time to seek these elemental draw points out.

Combat is perhaps the biggest place where Hajime Tabata has attempted to find that balance between familiarity and accessibility. Everyone has their favorite battle system in the series, but up until now, all of the the main numbered entries have been turn-based affairs, and this was the biggest spot where Tabata wanted Final Fantasy 15 to break free from series tradition.  "We didn't just want to make it a simple one-person action game," he says. "When you look at the combat within the game, it's a lot of party play and combinations. Everything is working together and meshed together in this action-style battle system, so it looks very complex but it's very smooth."

And he's not wrong. There's a lot going in the thick of combat, but these first few battles are just as satisfying whether you're planning out every move or simply hammering buttons until all of your enemies are defeated - and even basic attacks look really, really cool, let alone Noctis' signature teleporting Warp Strike. It's been vastly improved over the past couple of years as well, as the team has taken feedback from press and public alike, beginning with the Episode Duscae demo in March 2015, through the Platinum demo a year later, and even beyond. "Up until this point," says Tabata, "the typical pattern would be for us to release in Japan first, and we didn't really pay much attention or weren't very conscious about the outside world, so we were working in this confined space. In that sense, our perspective has broadened, and we are looking for and open to feedback, and seeking out feedback. That's definitely been a change in terms of mindset." That feedback has led to a much more strategic system than the 'hold-down-this-button-until-you-win' combat from Episode Duscae, where owning the area around the fight and setting up team attacks with your party members is just as important as actually landing hits.

But again, in these opening hours, you're not storming a power plant or kidnapping a princess. You're taking on odd jobs to help out the locals so you can earn enough cash to pay the mechanic to fix your broken-down vintage car. Or you're helping out one of your constituents, who just so happens to be able to help you secure passage on the next boat out of town if you track down some jewels for him - located of course, near a massive, sleeping, quad-winged bird. You can't afford an inn right now - why Noctis can't just walk up and shout "Do you even know who I am?" at the bellhop is irrelevant - so you camp out under the stars. Ignis cooks food for you. Prompto takes pictures. In the morning, Gladiolus challenges you to a footrace on the beach. This isn't just a road trip - this is summer vacation with your best buds in the whole world.

Of course, shit inevitably goes sideways, and you learn that the newspapers are reporting that Noctis, his father, and his betrothed have been killed by the invading kingdom of Niflheim. Sure, Final Fantasy 15 could have started here (the first reveal trailer shows you directly experiencing this invasion, which appears to have since been relegated to side-story status in the feature-length tie-in Kingsglaive), but it would have missed out on a great chance to let you get to know your entourage in times of peace, as well as war.

Two hours isn't nearly enough time to pass judgement on what has been reported to be a 50 hour game. I don't know how the combat will hold up over time, whether there is enough variety in its quest design to prop up an open-world of this size, or whether the story will even hold together over that length of time. What I do know is this: I got to spend way too brief a time in this utterly fascinating mash-up of reality, science-fiction, fantasy, and perfect hair, and I really want to hang out with this band of anime misfits some more.