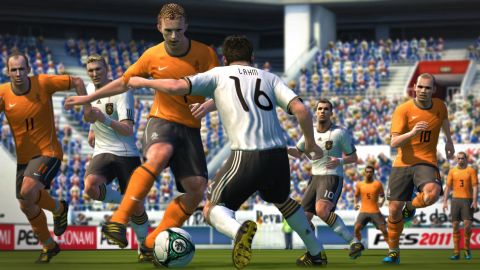 The developers at Konami must be kicking themselves, rather than spherical objects. For years their series simply shat all over FIFA, yet they’ve gone and blown a 3-0 lead and let their rivals take advantage. It’s akin to PES overlord Seabass and his team winning the first leg of a Champions League semi and just putting their feet up for the second. This time last year, we said they needed some Fergie hairdryer treatment to get rid of the complacency creeping in...

Well, it’s better. Much better. But FIFA‘s domination of PES continues for another year. Despite some significant visual improvements, it lacks that level of detail to elevate it to Champions League status (which is still the key license in the game). Take the 1000 new player animations created from some 100 hours of motion capture footage. They look great as players’ legs are hacked away by your midfield terrier, but too often the same animations crop up. When you’ve seen a few games, you’ve seen them all. Similarly, not being able to control your players after a goal’s been scored seems too old-fashioned now. The goal celebration cutscenes also bear too similar a resemblance.

It’s made worse because the physics engine barely pops in to say hello before pissing off to watch the game from the stands. Aerial ball launched from the back? Although two players will collide, their bodies will annoyingly lock together without any feeling that you’re truly wrestling for the ball. It feels as if it’s predetermined as to which way the ball will then go, rather than the organic physical confrontations of FIFA. You either know who’ll win each 50-50 before it takes place or annoyingly your players fail to make contact with the opposition dribblers, like the porous Wigan defense.

That’s not to say, however, that this doesn’t provide a fun game of football. It does, it’s just that compared to FIFA, PES’s more zippy shooting and passing (nice new power gauges though), jerky stop-start running/dribbling, and limited physics and player animations all make it come off as more arcadey, and hence lacking in real substance. The slightly faster pace to the ball does better reflect the true spirit of the beautiful game for our money, however the lack of variety in the players means games pan out in similar fashion and there’s little true next gen detail here. Especially given the nuances offered by the Personality Plus system injected into EA’s latest version of FIFA.

Virtually unnoticeable 360-degree dribbling and player locomotion, consistent ball control for all players (no matter the ability) and non-league part-time player intelligence all add to the mix, while the assisted passing has an imprecise feel despite the new Total Control upgrade it’s been given. That ping-pong passing rears its highlighted and expensively coiffured head here too. Identikit players make it difficult to pick out the stars while the off the ball movement of your team is unhelpfully slight. Also, why does the opposition drop off to its own penalty area when you have a goal-kick?

So, there are improvements here, but also countless, annoying niggles, and while FIFA has problems too, they’re just not as key or as noticeable. By comparison, this still looks and feels a little old hat. Sadly, the wait for a true next gen Pro Evo continues.

If you'd like to see more articles from Xbox World 360, you can get a subscriptionhere.