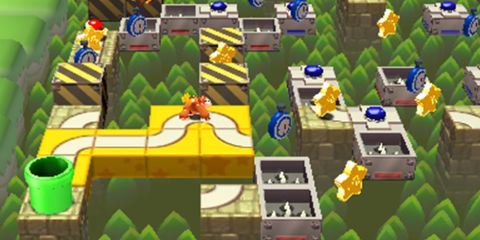 Would you pay $10 for a one-note puzzle game? If the answer is yes, there's a chance you'll dig Minis on the Move, a downloadable 3DS title that's quite unlike its predecessors. But if you're going into this with expectations exceeding a glorified iOS game, you may be left wanting. Though Minis is a satisfactory puzzler, it's hard to recommend it over the wealth of eShop games that don't revolve around mechanics which are over 20 years old.

There's a reason the core gameplay feels so ancient: Minis is essentially a retooled, Mario-branded version of Pipe Mania, a tile-based puzzle game that requires major planning skills and some minor dexterity. In each of the game's four modes, your task is essentially the same: create a conduit from point A to point B by placing fixed bits of pathway on a grid. Besides some nifty springboard, rotating, and conveyer tiles, this is functionally the same game as the 1989 classic, with wound-up, mechanized Mario characters in place of the slowly moving green ooze.

This is a stark departure from the Lemmings-style gameplay of the previous Mario vs. Donkey Kong games, and for many, it's liable to be disappointing. Rather than being a 2D brain-tickler that evokes the beloved Donkey Kong on the original Game Boy, Minis is nothing more than the sum of its stages. You're presented with puzzles, sans any context or continuity, and all that's left to be done is solve them. Compared to the innate charm of most Mario games, Minis can’t escape feeling somewhat hollow.

The gameplay is entirely touch-controlled, via the aerial view on the 3DS' bottom screen; your only inputs involve dragging and dropping pieces to make a path, or tapping your cutesy automaton (a miniaturized Mario, Peach, Toad, etc.) to give them a short speed boost. The latter sounds like a useful mechanic, but it comes at a cost: When nudging your little mech forward, they'll make a high-pitched squeal as they get into gear. At best, this is mildly annoying; at worst, as when using Peach or Pauline, their repetitious yelps sound uncomfortably suggestive.

You'll first get your bearings in Mario's Main Event, which eases you into the mechanics of the tile-based action. Though the first few stages are brain-dead easy, things start to pick up when you realize that failing to use your allotted tiles before your supply fills up spells instant defeat. Add to the fact that your Mini will naively waltz to its death if left unattended, and the pressure to lay out a safe path starts to build. Those looking to get the most out of the game will chase after the three coins strewn about each level before heading for the exit, many of which will be hovering in fiendishly out-of-the-way locations.

It creates an anxious sort of puzzle experience, combining the forethought of your visualized path with the randomized nature of the tiles you have to work with. Is it fun? Sometimes--but when the pacing starts to feel frantic and disorganized, there's no joy to be had in finally solving a troublesome stage. Thankfully, these levels feel more like a prelude to Minis' standout mode: Puzzle Palace, where you must devise a safe route using a fixed set of given tiles. In this mode, you'll have all the time in the world to plot out the best path, which may initially seem impossible. Because there's no built-in hint system, getting stuck is about as fun as staring at a crossword puzzle you can't solve. But when you do finally devise the correct course, you'll beam with satisfaction as your Mini marches to its goal.

Racing against the clock is the theme of the other two modes: Many Mini Mayhem, which has you micromanaging the movement of multiple Minis, and Giant Jungle, where your Mini must traverse a multi-screen grid within a very strict time limit. Alas, you're likely to abandon these modes within minutes, as they're downright stressful to play without really feeling like a test of brainpower or skill. Collecting all the coins in any given level will reward you with a star; amass enough stars, and additional, short-lived minigames will be unlocked, alongside some bland collectibles. These are enjoyable when you first try them, but they don't amount to much more than three-minute high score attempts. You can also design and share your own levels via StreetPass, though it remains to be seen if player creativity will match or outdo professionally made puzzles.

As a whole, Minis on the Move feels like a bit like a bait and switch, ensnaring gamers familiar with the franchise's established gameplay, only to deliver something unexpected and not entirely satisfying. With over 150 stages--some fiendishly tricky--and a modicum of variety, there's enough here to keep your gray matter occupied for a dozen or so hours. But those expecting something more than a simple procession of puzzles, ones that could operate on any non-3D system, should stay away. If you're in the mood for charming brainteasers, your eShop money would be much better spent on Mole Mania or Pushmo.