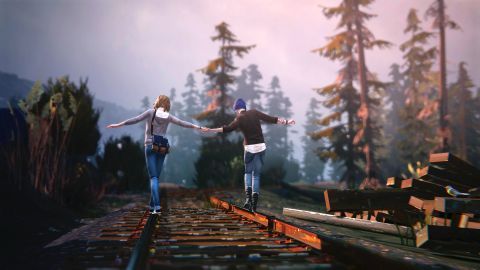 Life is Strange fails to execute in critical spots, but its beautiful world, fun time-reversal, and honest look at adolescence makes it a game worth remembering. A diamond in the rough.

Being a teenager can be rough, and I'm not saying that in the facetious way adults sometimes do. You're experiencing a lot of things for the first time - some of them complete crap - and it can feel like your greatest talent is screwing stuff up. Developer Dontnod tries to bottle that turmoil and self-discovery with Life is Strange, a school-days drama where a shy teenage girl suddenly develops time-reversal powers (oh man, I could've used some of those) and struggles to use them responsibly. Along the way, Life is Strange suffers from adolescent stumblings of its own - taking on too much and not knowing how to deal with it, coming to a predictable conclusion that lets the rest of the season down. But between a sweet central friendship, a vibrant world, time-manipulating gameplay that works well throughout, and emotional moments that latch onto your heart and squeeze, it's clear that there's something special going on here.

Life is Strange is the story of Max Caulfield (a photography student attending art school in her old hometown) and her childhood friend Chloe (a tough-talking punk who's shot to death in the school bathroom during the game's opening). Shocked and grief-stricken by her friend's death, Max spontaneously develops time-rewind powers and helps Chloe escape unharmed. Those powers are the central focus of Life is Strange's gameplay, letting you reverse time to test out different responses to tough decisions, or sneak into a locked room and then rewind to erase any evidence of your intrusion. It's a simple idea that's easy to grasp and fun to experiment with, with results ranging from hilarious (when Max successfully guesses how much change Chloe has in her pockets) to horrifying (when a drug dealer gets angry and flashes a knife in Max's face). In terms of how much those decisions mean in the end, Life is Strange falls somewhere between The Walking Dead and Dragon Age - your choices do have a major impact on events that happen throughout the game and are mentioned later on, but the final decision happens the way it does no matter what. It's the framing and the conversations around it that change.

When you're not time-turning, Life is Strange plays out like many adventure games that came before it: you interact with different objects in the environment that range from plot-critical to merely decorative, and have conversations with your peers and teachers to get the full story of Arcadia Bay. It's not ground-breaking stuff, but entertaining enough, and works to consistently give the world depth and a sense that it doesn't all revolve around you.

While being able to rewind time theoretically might make your decisions feel less impactful, it actually adds a new level of thoughtfulness to an otherwise familiar choice-based system. The decisions you make are legitimately tough, often with long-term consequences that you can't see until it's too late, leaving you anxious and uncertain, regardless of Max's powers. When Chloe's stepfather slaps her across the face because he found her holding drugs, you can go back and claim they're yours, but what trouble will that cause down the road? Will he refuse to help you later when you desperately need it? In a way it helps you identify with Max even more, putting you in the same position of uncertainty she regularly finds herself in.

All of this character-building is bolstered by gorgeous art and music that give life to the game's world. Given how little you see of the actual town (the story is relegated to Blackwell Academy, Chloe's house, a diner, and some uninhabited areas out in the wilderness), making you feel a real connection to it is no small feat, and Life is Strange pulls it off gracefully. Rather than using a real-world setting for the sole purpose of contrasting with its supernatural elements, Life is Strange wants to highlight beauty in the ordinary. Every chapter has at least one place where Max can take a break and watch the world go by, and the game pays careful attention to making even the smallest pieces of the environment feel real, from the ambient noise of the Two Whales Diner to the things Chloe's written on her bedroom posters. You get the sense that this world isn't just a backdrop for something else, but a fully-realized character of its own, and that makes the time you spend there much more fulfilling.

Of course, friendship and watching the leaves turn isn't all there is to Life is Strange: there's also a detective story, a thriller plot, and a meditation on the effects of time travel that the game tries to handle all at once. That's a lot of balls to keep in the air, and Life is Strange doesn't have the finesse to pull it off. Though its slice-of-life story is appropriately lighthearted and its mystery is replete with strong twists, the supernatural plot falls back on sci-fi clichés and brings the whole story down with it. This is especially obvious in the game's conclusion, which struggles to explain the nature of Max's powers and ultimately takes the easy route with one of the oldest tricks in the time travel book. It's completely predictable and feels like a sad way to finish an otherwise great series, like ending a delicious homemade three-course meal with the brownie from a frozen TV dinner.

It takes a lot to make a game feel worthwhile when it doesn't stick the landing, but Life is Strange has a saving grace: the honesty with which it portrays the painful struggles of adolescence. Max encounters everything from cyber-bullying to suicide, from overdose to domestic abuse, and getting to see the human toll through her eyes can be hard to handle. While the plot occasionally dips into after-school-special territory, 99% of the time its handling is spot-on and deeply affecting: even if you've never seen a friend's private photos leaked onto the internet or talked to someone so beaten down by depression that they can barely speak, Life is Strange's raw sincerity still hits you where it hurts. That's part of why Max and Chloe's relationship feels so powerful, and works so well as a central pillar of the story: when they use Max's powers to sneak into the school's swimming pool after hours, or have a blow-out fight that leaves them both vulnerable, their interactions feel effortless and genuine, making them into stronger, more engaging people.

These sequences are subjective by their very nature - the psychological abuse that one person finds cheesy could be devastating to the person sitting next to them - and the game doesn't always handle them gracefully. However, these moments are less about the reality of being a teenager (some things are out of your control) and more about how it feels to be a teenager (I should have done something). In that regard Life is Strange hits it out of the park: it takes risks, talking about the transition into adulthood in a frank way that games struggle to pull off, if they try at all. And in putting its characters out there at their most vulnerable, it hits a nerve that'll still sting hours, days, weeks after you turn the game off.

There's a lot Life is Strange could have done better. It comes to a disappointing conclusion, doesn't handle all of its intense subject matter well, and ultimately falls short of its potential. But looking at what it does accomplish paints an impressive picture: a true-to-life story of young love and friendship, a piece of visual art that's so honest about painful experiences that it's hard to keep your composure through the whole thing. It's a game we'll be talking about for quite a while - both its successes and flaws - and may look back on fondly in the far-flung future, wistful and a little bit embarrassed. But just a bit.

Life is Strange fails to execute in critical spots, but its beautiful world, fun time-reversal, and honest look at adolescence makes it a game worth remembering. A diamond in the rough.