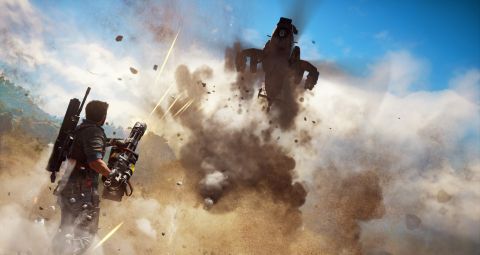 A chaotic action romp, tragically let down by repetition and padding. There's fun to be had, but all too little variety in its huge open world.

Just Cause 3 is at its best when you're role-playing a sort of jazz sociopath. Flying a plane into a silo of fuel tanks, tethering cars to a bridge and blowing it up, using modified C4 boosters on civilians. It comes alive in these moments, when you're flitting between violent, explosive acts – a rebel without a cause, just or otherwise. Just Cause 3's problem is that every one of its surrounding systems detracts from this anarchic core. There's fun to be had, once you untether yourself from the stingy unlocks, the need to liberate endless provinces, and the relentless militia. The game preaches chaos, but constantly holds you back with rules and restrictions.

Once again, you play Rico Rodriguez – former CIA operative, and a regime-change specialist. Rico has returned to his homeland, the fictional island of Medici, where he plans to overthrow dictator Di Ravello and his military, the DRM (see what they did there?). If you've played Just Cause 2, you'll be familiar with Rico's modus operandi. If not, here's a hint: explosions. Rico must destroy the red and white objects that denote Di Ravello's infrastructure. Military bases are filled with satellites, electric substations, fuel tanks, and so on. Towns and villages contain propaganda speakers, billboards and statues. Clear a settlement of all these things, and you liberate it for the resistance.

Then you do it again. And again. Unlike in Just Cause 2, mission progress is only loosely tied to liberation. There's no incentive for freeform destruction; rather, the onus is now on structured repetition. The map is divided into provinces, each one containing a number of settlements. You need to liberate each settlement in a province to capture it, and then do so again many times over. It's not long before Just Cause 3's map – a huge, 400 square mile space – feels like a chore to be completed. I no longer see the explosions. Instead, each destroyed item is a mental tick next to the giant checklist that I'm working my way through.

The solution, you might think, is to ignore the liberation aspect and enjoy the sandbox. But the game forces your hand by restricting the best versions of its most entertaining toys. There are some brilliant tools in Rico's arsenal – the most versatile of which is his tether. It's possible to connect two objects, and then retract this tether to pull them together. Tether an enemy to a roof, and you can use this retraction to fling him into the air. Tether an explosive barrel to a fuel tank, and you can save yourself a C4 charge.

The world's a stage

Medici is a beautiful, varied space, but feels strangely staged and sterile. The objects Rico must destroy have no in-game utility. Compare to Metal Gear Solid 5, where the decision to destroy a satellite dish has a pronounced, dramatic effect on the game's systems. In Just Cause 3, a satellite dish has no function – it's a piece of set dressing that you're required to destroy. Moreover, Rico can't meaningfully interact with the world. Whatever you find, the result is only ever more explosions.

Not that you need to: C4 is unlimited now, although, initially at least, you can only place three charges at once. This is a great addition that goes some way to reducing the laborious process of levelling a military base, but getting the most out of these tools requires engaging with an upgrade system that reduces Rico's abilities in some major ways. Upgrades – called 'mods' – can be unlocked with Gears, which are earned by completing the challenges that appear near a liberated residential settlement. Each mod is categorised, and can only be unlocked by completing challenges of that category. Car mods, for instance, can only be activated with Gears earned through car challenges.

The best mods act as interesting situational extras that can be enabled or disabled as needed. One marks any vehicle model that hasn't previously been delivered to a garage, making it easier to expand the options available to call in via supply drop. Another turns your C4 into a rocket booster – fun when messing about, but less useful when clearing a settlement.

Too many mods, though, are quality-of-life upgrades that serve purely to pad out the system. You're forced to unlock more simultaneous C4 and tethers, the facility to carry more than one of the beacons used to call in supply drops, and even the ability to aim down sights. Some of these are high-level unlocks, requiring you to liberate multiple settlements and repeat the same handful of challenge types.

Occasionally, throughout the campaign, you're asked to liberate multiple provinces before you can continue – again increasing the feeling of grind. The campaign itself is enjoyable enough, albeit tonally inconsistent. It swings wildly between comedy and pathos, never quite finding an easy balance. In terms of objectives, though, it provides a welcome sense of authorial direction to the battles; something that's often lacking during the seemingly endless waves that harass you during the liberation of a military base. There is, however, an overreliance on escort missions, which can lead to plenty of frustrating failures.

To be clear, there are still lots of ways to engage with Just Cause 3 – many of them well suited for short bursts of violent action. Call in a military helicopter, and you can rain down destruction. Find a tank, and you can punch through a base, blowing things up with wild abandon. With an eye for improvisation, there are always interesting options. Unfortunately, Di Ravello's army is a bit too effective. The game can feel like it's punishing you for experimentation – the prevalence of anti-air guns and the sheer size of the DRM's response makes for an exhausting fight, especially later in the game as more heavily armoured soldiers are introduced. Often, the most effective solution is guns – all of which are a bit pedestrian given the silliness that pervades so much of the game.

Just Cause 3 is disappointing because its individual elements could have been put towards something so much better. Short-range traversal feels great – the wingsuit, parachute and grappling hook combining to make navigating the Medici terrain a joy. It's less viable over long-distances, and so the limited stock of fast-travel flares and supply drop beacons feels needlessly restrictive.

Just Cause 3 feels less than the sum of its parts. There's fun to be had, for sure, but it's couched in a structure that's filled with frustration and, worst of all, boredom. It offers 400 square miles of world to liberate, but fails to provide enough variety to keep things interesting for even a fraction of that space. What's left is a lot of style, but very little substance.

A chaotic action romp, tragically let down by repetition and padding. There's fun to be had, but all too little variety in its huge open world.