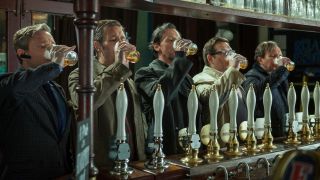 In 2004, Simon Pegg, Nick Frost,and director Edgar Wright – fresh from their cult Channel 4 sitcom Spaced – gave the world Shaun of the Dead, “a romantic comedy with zombies”, as the poster famously put it.

In 2007, they reloaded with Hot Fuzz, a ballistic action movie set in – er – Gloucestershire. And then, in 2013, they delivered The World’s End, a sci-fi flick about estranged friends on an apocalyptic pub crawl who battle Body Snatcher-esque robots that have taken over their home town.

As reflected in its Rotten Tomatoes and IMDb scores, trilogy-ender The World’s End is largely considered the weakest of the lot. I would argue, however, that it’s actually the best, and here’s why.

Firstly, the rapid-fire script crackles as the reunited pals descend into boozy banter. Infinitely quotable dialogue is standard in the Cornetto films, but the key here is the way these lines hook you into characters: So when Nick Frost’s Andy finally knocks back a line of shots and announces “Let’s Boo-Boo” – an in-joke set up several scenes prior – we’re invited in as one of the guys.

Secondly, the chemistry between the ensemble is effortlessly charming. Real-life besties Pegg and Frost are joined by Paddy Considine, Martin Freeman, and Eddie Marsan, and the evident affection between them all makes it easy to believe they are genuine friends. It also ensures that third-act revelations about alcoholism and mental health hit home with surprising emotional heft.

And lastly, The World’s End is full of wistful nostalgia: For friendships, films and the promises of youth. As such, it acts as the perfect series closer, wrapping up the themes of Fuzz, Shaun, and even Spaced, while also looking forward to the future (albeit one filled with “smashy smashy egg men” and inky blue blood).

So pull me a pint and I’ll meet you at the bar, because this might just be the best night of your life. Or is it just me?

Is it just me, or are all Marvel Cinematic Universe movies the same?

Is it just me, or is An Unexpected Journey the best Middle-earth movie?