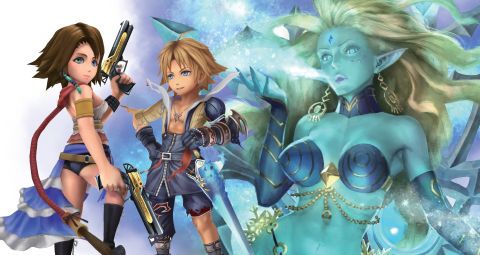 Final Fantasy Explorers is a great entry point for those interested in the co-op monster-hunting genre. The combat is its strongest asset, but expect to have to do some grinding along the way.

With its four-player co-op design, massive monsters and copious amounts of gear, you can’t look at Final Fantasy: Explorers and not compare it to Monster Hunter. They both challenge you with tracking down ever tougher beasts, and they both want you to sink in hundreds of hours by experimenting with their multiples classes and tempting loot. But while they may seem similar on the surface (probably purposefully so), it’s that all-important Final Fantasy twist that makes this a remarkably solid, and entirely different, proposition.

Like the name suggests, you’re an explorer who trots out into the wilds of the Island of Amostra to find potential crystals for harvesting. You’re effectively acting as a preliminary scouting party, clearing the land of horrible beasties and magical nuisances so that others can eventually follow to mine the goods (did no one learn anything from Avatar?!). You start out from your base in the town of Libertas taking on quests for the locals and slowly building a name for yourself, unlocking ever tougher encounters and impressive gear schematics along the way. It’s an incredibly simple premise, but that also means it never gets in the way of the game’s star attraction: its combat.

The fighting is where you really start to feel that Final Fantasy flare. There are 21 classic FF Jobs (basically your standard classes) to choose from, including the likes of magic-wielding Black Mages and spear-brandishing Dragoons. You’ll only start out with a few, but as you master the basics, more are added to your repertoire. Each class feels suitably different to all of the others, though they all fall into the ‘holy trinity’ of fighting styles - a tank with high defensive to lure and keep the attention of foes, a healer to keep the tank alive, and a ‘dps’ or damage-dealer (usually two of them) to keep up the attack rate. There are also a few Jobs with buff skills that’ll either boost your party so they deal more damage, or will ‘debuff’ your enemies with poison and the like. Despite how varied they all feel there’s still plenty of room for different combinations to work together. If none of your friends want to play as a White Mage there are still plenty of options to get around that when working together.

While the game is very much geared towards being played with others with its party structure, playing solo is still a viable option. While you might have to be careful about which class you use when playing alone (I switched from Monk to Knight and it made things so much easier), there are a few things in place to make sure you don’t miss your real-life companions too much. Enemies scale to the number of people in your party so you’re never left in the lurch and unable to continue, and there’s a monster lab that lets you build your own friends, just with more scales and goblin skin.

Summons (Eidolons in FF: Explorers vernacular) such as Ifrit and Shiva are well known in the Final Fantasy universe as powerful allies, but here they’re the beasts you should be most afraid of. They’re far more powerful than anything else in the game, and have dedicated arenas to take them down in. They also come with huge movesets that you’ll have to learn to dodge and form strategies against. They make for a great challenge, but you will have to grind them to get the best gear.

Not only are monsters incredibly useful in the absence of actual human interaction, it’s a fun and surprisingly deep distraction. Every now and then an enemy in the field will drop an Atmalith, which is essentially its soul, that you can then take to the Monster Lab in town to turn into an obedient pet. They function a bit like Monster Hunter’s Palicoes in that they’ll help you in a fight, but with so many monsters to recruit they make for much more varied partners.

Finding and recruiting them becomes like a mini Pokemon game as you create your ideal team. The only drawback is that if you take one of the larger fiends with you they can obscure your view. I took a liking to a pair of toads with potent attacks, but they’re bulky and bounce quite high when they move and would occasionally jump in front of the camera, leaving me unable to see in a fight. Goblins are shorter and therefore make for better friends.

While all of the systems work really well together and combat is a blast, there’s one incredibly frustrating drawback. About 4-5 hours in you hit a wall and you’ll need to do a lot of repetitive grinding to get over it. No matter how good a game’s combat is, needing to grind will always be tiresome. But in this case it’s also worth the effort.

Overcome this slump and the game really starts to open up - you can craft new gear, visit new places and learn more moves. But most importantly it feels like you’ve graduated into proper adventuring - all of that hard work was your final exam and now you can make a real name for yourself. Weirdly I then started //enjoying// any later repetition as I could experiment with different classes and styles. The early grind forcefully hones your skills until you become a truly confident player, even if it is a pain to get through.

You’ll also unlock trance mode soon after - a brief state where you have heightened powers and the ability to summon powerful attacks or even turn into heroes from previous Final Fantasy games such as Squall or Lightning. It adds a powerful and snazzy flourish that comes in handy when you want to go all out at the end of a boss fight. You can also customise the difficulty of quests by giving enemies more health etc before you set up, giving you more options when you’re after a challenge.

Above all things Final Fantasy Explorers is approachable. Sure, it borrows a lot from the likes of Monster Hunter and it’s not quite as deep, but it’s also far, far easier to pick up and understand. It’s tutorials are clear, the menus uncluttered, and the combat is simple. In some ways it’s a great training ground for the monster-hunting genre, teaching you how to switch between classes and work with others on the small screen before you join the bigger kids with their Rathalos armour and Palicoes. FF: Explorers is a great route into what can be an intimidating and complicated set of games and is the perfect antidote to what the genre needs right now.

Final Fantasy Explorers is a great entry point for those interested in the co-op monster-hunting genre. The combat is its strongest asset, but expect to have to do some grinding along the way.

Dani's ears prick up every time the words 'final' and 'fantasy' are mentioned in the same sentence. Great when talking about JRPGs, but it becomes a real hassle when discussing the finals of your fantasy football league. Cloud would totally be a better striker than Rooney.
See comments