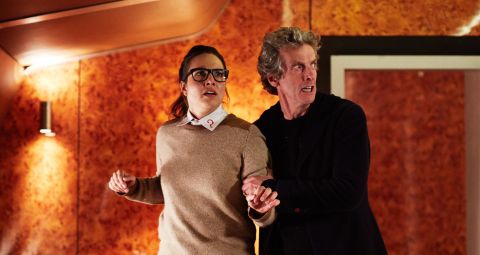 We’re on familiar territory with the first episode of this year’s Zygon two-parter – bring back an old villain from classic Who, gradually reveal their plan to take over the world over the course of 45 minutes, and leave them on the verge of victory by the end of the episode. Haven’t we been here before with the Cybermen (at least twice), and the Sontarans?

In fact, that slight sense of deja vu is the biggest problem with an episode whose beats feel so familiar that you could almost set your watch by them. It’s a fun ride and there’s something satisfying about gradually realising what those crafty shapeshifters are up to, but it doesn’t really help the drama when genuine twists and surprises are thin on the ground. The policewoman in Truth Or Consequences being a Zygon? Hardly out of leftfield. Clara being replaced by a duplicate? Okay, we didn’t guess she’d be called Bonnie, but her odd, rather flippant, gun-relishing behaviour meant our suspicions were aroused fairly early on. Even the denouement, with UNIT seemingly defeated, and Clara (sorry, Bonnie) firing a rocket at the Doctor’s plane, doesn’t really leave you on the edge of your seat – you know that the Time Lord will do something wibbly, wobbly or timey-wimey within seconds of part two opening, with or without his Sonic Shades.

That’s not to say there isn’t lots to like about writer Peter Harness’s second Doctor Who script – it’ll definitely be less divisive than last year’s “Kill The Moon”. It’s packed with wonderful ideas (like the Zygon high command being a pair of schoolgirls), funny one-liners, and pop culture references – nods to Invasion Of The Body Snatchers were inevitable, but it’s fun to get The Silence Of The Lambs and ’70s funk (the Doctor’s alter-ego) in there too.

It’s also arguably the most politicised Doctor Who episode since the show’s return, with references to contemporary immigration policy, terrorism, the enemy within, and governments being a little too eager to bring in the big weapons rather than talking things through diplomatically. Okay, the allegories are sometimes a little clumsy – and it’s not as hard-hitting as, say, Battlestar Galactica – but it’s refreshing to see a primetime family drama tackling such issues head on. You can’t help feeling that real-life politicians had the peace-mongering voice of the Doctor whispering in their ear.

The attempted Zygon invasion in the “’70s, ’80s” that Kate Stewart refers to was presumably Tom Baker Who story “Terror Of The Zygons” – the aliens’ only appearance in old Who.

It’s good to have the Zygons back, too. Considering they only appeared in one classic Who story, it’s remarkable how iconic and recognisable they were, even before their return in 50th anniversary special “The Day Of The Doctor”. Their “blobby” appearance may be easily mockable, but they’re one of the Doctor’s most threatening foes – how do you stop an enemy you can’t spot? – and their habit of turning people into steaming piles of hair walks that tricky line between creepy and funny.

The evolution of their modus operandi really works. Whereas the more we saw of the Weeping Angels the less scary they became – their chilling simplicity diluted – here the addition of the ability to use your thoughts to replicate a loved one is brilliant. The best moments in the episode come where soldiers are faced with the possibility of murdering family members.

Showrunner Steven Moffat admitted to SFX in August that, “I constructed, in part, the 50th anniversary as a prequel for [this story],” and that groundwork really pays off in “The Zygon Invasion”, both in the idea that the aliens were already among us thanks to the deal struck to rehouse them on Earth, and the return of Osgood – despite her death at the hands of Missy in the series eight finale, it makes perfect dramatic sense. The Zygon/human hybrid being the solution to the whole war makes her an intriguing McGuffin, and the two Osgoods infodumping before the opening credits is a really effective (and hilarious) way to set up the episode. (You still need a pretty good knowledge of “The Day Of The Doctor”, though.)

So a decent first half of a story, but not a classic. It’s going to have to turn things on its head to achieve greatness – perhaps the fact part two is called “The Zygon Inversion” puts it in good stead.

So Far, So Osgood

It’s also good to know that the Doctor hasn’t lost the question mark motif entirely, with the revelation he has them on his underpants.

This is director Daniel Nettheim’s first episode behind the camera of Doctor Who, but it’s not his first outing in the wider Whoniverse – he helmed four episodes of the Australian K9 series in 2009. He also directed a couple of episodes of the excellent Humans earlier this year.

It’s real. Yes, there really is a town called Truth Or Consequences in New Mexico. And it was renamed after a radio show.

The Doctor: “Do you still have the Presidential aircraft?”
Clara: “I thought you didn't like being President of the world.”
The Doctor: “No, but I like poncing around in a big plane.”

The Doctor: “You can't have the United Kingdom. There’s already people living there. And they think you're going to pinch their benefits.”