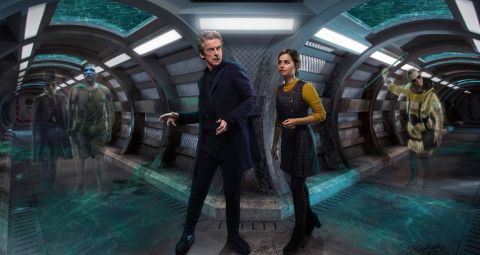 Doctor Who has done ghost stories before, base-under-siege stories before, and stories with underwater menaces before. Here's one combining all three, and it's a tense, claustrophobic affair, well shot and edited but bordering on exhausting and, visually speaking, oppressively gloomy.

Toby Whithouse's fifth script for the show might be full of doom but it's also very funny at times. The scene where Clara brings out a selection of cards featuring apologies for the Doctor to make after he's inevitably offended someone is hilarious, as is his clumsy attempt at reading one out (“I'm very sorry for your loss, I'll do all I can to save your friend slash family member slash pet...”), and a neat way of lighting (and lightening) his character. Also rib-tickling is his: “…two weeks of 'Mysterious Girl' by Peter Andre. I was begging for the brush of death's merciful hand”.

Scary is the order of the day, though, when the chatter has intermittently died down. Particularly spooky is Pritchard turning round and revealing a lack of eyes, but also effective is the end of the pre-titles sequence where Prentis (a mute-for-now Paul Kaye) strides forward accompanied by a scream.

“Under The Lake” is a pretty traditional Who adventure – you could say routine. Doctor and companion land somewhere, there's a group of people, there's trouble afoot, the Doctor tries to put things right. Corridors are run down, then run down some more. Many past tales come to mind, especially excellent Tennant episode “The Waters Of Mars”, but the fact that this is the first of a two-parter means there's no wrap-up to build towards. What it does have, though, is a strong visual cliffhanger – the Doctor is a ghost! It tantalisingly sets up next week's intrigue.

This is episode number 27 for Jenna Coleman as Clara – by series end she'll have done 36, one more than either Billie Piper or Karen Gillan.

Talking of ghosts, isn't the Time Lord a bit quick to believe that this is what these spectral images are? (“These people are literally, actually dead.”) They could be a thousand other things, and obviously will turn out to be so. Also, in a series where death, particularly in recent years, has been downgraded to be near meaningless, the “ghosts” and the Doctor's “death” have minor impact. What is good to see is that the Doctor's more commanding this series, more sure of himself: he bosses this (immaculately diverse) crew with aplomb. Much of it is an example of what Steven Moffat has called the challenge of writing the Doctor as the cleverest person in the room.

This episode finished airing at 9.10pm. That's pretty late. Too late. But like most of the previous season it's more or less justified considering the unsettling, grim nature of the story. The question remains though: is Doctor Who living dangerously by choosing not to appeal to the young, the show's traditional cheerleaders?

“Under The Lake” was a competent episode but somewhat heavy going, and it'll be good to see things opened up in concluding part “Before The Flood”. Deep breaths, all.

Sophie Stone, who plays Cass, is a deaf actress who won an acting talent competition which led to a year's TV contract; she went on to do three years at RADA.

Peter Capaldi says of this episode: “We're not confronted by fish people, much as I'd love to be.” We will be, when Troughton story “The Underwater Menace” finally comes to DVD on 26 October.

So we learn that the Doctor has also met Shirley Bassey. Dame Shirley Bassey, from Tiger Bay, Cardiff, Wales, of course, current home of Doctor Who.

Good to see that in 2119 these chunky 1970s telephones are still in use. Well, why mess with a classic?

The pick of the Doctor's notes has to be this one: “It was my fault, I should have known you didn't live in Aberdeen.”

For more on top sci-fi TV shows like Doctor Who, subscribe to SFX. You can read an exclusive interview with Peter Capaldi in the current issue.