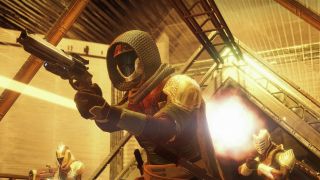 Destiny players on PlayStation have been getting exclusive content since the base game launched in 2014, and that tradition will continue with Rise of Iron, the PlayStation Blog confirmed today. So what do PS4 players get for their console loyalty? A quest, a ship, and a Crucible map.

The quest "Show of Strength" will have you scouring the Plaguelands to help Tyra Karn understand the mutated Fallen's religion. Succeed and you'll be granted the Timeless Tereshkova ship, which I gotta say, looks pretty sleek:

If you're more of the PvP type, you'll want to check out the PS4-exclusive map, Icarus. Located in the Languid Sea of Mercury, Icarus is a mid-size map compatible with any 6v6 mode. This solar farm is split into an inner and outer perimeter, with the former being faster but more dangerous, and the latter allowing long sightlines for snipers.