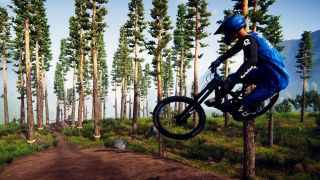 Think back to the first time you fired up Tony Hawk's Pro Skater. Remember the thrill, the intense excitement that came from bursting through those windows. You began to pick up speed as your board rolled down a steep hill, and you couldn't help but grin as you entered a warehouse playground designed just for you and your gnarly tricks. You practically scraped the sky when you vaulted into the air off that halfpipe, and your grinds could go for so long they'd rival a 10th-century epic poem.

Of course, we know how far-fetched and outlandish Pro Skater got. Where games could have you regularly fly 30 feet into the air and float for what seemed like an eternity, real-life skaters rarely breach even half that, and are far more susceptible to the effects of gravity. The current record for highest 'air' is 25.49 feet. Watch Danny Way (the record-holder) attempt the jump several times and fail before he finally lands it:

The Pro Skater games weren't really concerned with realism - they wanted to give you the feeling of being an expert skateboarder. In recent years, it would seem we've lost sight of that, as the latest entries in the extreme sports genre have been middling, if not outright disappointing.

But a game from a small team in the Netherlands is poised to turn this losing streak around. That game is Descenders.

A different kind of spin class

Available now on Steam Early Access and coming later this year to Xbox One, PS4, and Switch, Descenders bills itself as "extreme downhill freeriding for the modern era" - meaning it's a game where you bike down procedurally-generated mountain trails, buckling down on the straightaways and leaning hard into sharp turns, all at speeds that would make even diehard daredevils consider adding training wheels.

Roel Ezendam, from developer RageSquid, acknowledges the influence of games like the Pro Skater series on Descenders. "It definitely goes back to those days of Tony Hawk's Pro Skater, SSX, Skate," Ezendam tells me. "Those are games that we really love playing, and we felt like there was a gap in this space. But we also thought we could do something interesting with the genre, rather than just try to make another Tony Hawk game."

"We were inspired by roguelike games, games like Spelunky," Ezendam says, referring to the procedural way Descenders builds its mountains and tracks, creating winding paths that are never quite the same as the one you rode before it. "So as we were making this, we were combining these two genres together and seeing what came out."

Ezendam explains that, early in the development process, Descenders began to suffer from feature creep. The game currently has three fictional teams that players can choose to represent, but at one point it had more than a dozen. The team also experimented with a video editing feature as a nod to the prevalence of handheld cameras and GoPros in the extreme sports community. However, the idea was ultimately cut, as it was drawing attention away from the core gameplay.

"This is the deepest, most fundamental design pillar of the game: the entire game is built around, 'How do we capture this genuine feeling of extreme sports?' So that's not necessarily meant in a realistic way, it's not 'how do we create realistic bike physics,' it's more about this feeling of when you're going down a hill, when you're dropping in on a half-pipe," Ezendam says. "It's a hard balance to find middle ground between realism and fun."

Descenders is designed to appeal to both those with real-world extreme sports experience and people who've never so much as touched a skateboard or mountain bike. Mike Rose, the man in charge of publishing label No More Robots, says the team has already received valuable feedback - sometimes from unexpected sources. Instead of Discord, NeoGAF, or Reddit, Rose might find a post about Descenders on Instagram, where it receives far different criticism than it does from a more games-savvy audience.

Still, Rose doesn't seem particularly bothered, and even welcomes feedback from the many corners of the internet, from the gamers who can tear apart and mod their systems, to the bike enthusiasts who might spend hours deliberating between buying a Canyon CF 9.0 Pro or a Heller Barghest NX (sidenote: I have to say, despite not knowing a thing about mountain biking myself, I'm now convinced it has some of the coolest names for its products).

"From the beginning, our goal was to find the middle ground," Rose said.

Ezendam agrees. While he doesn't consider himself much of a downhill biker (the Netherlands is severely lacking in hills), he does enjoy skateboarding - a hobby he says he picked up thanks to playing the Tony Hawk games in his youth. The RageSquid office even has a small half-pipe, so Ezendam - or any other member of the team - can take a break and/or get into the extreme sports mindset whenever they need to.

Descenders is still early in development, and RageSquid has more features it wants to implement before slapping a version 1.0 on the game. Ezendam mentions building out practice mode and enabling a more free-roaming sandbox mode, among others. Ultimately though, he says the game will "take shape according to what the community wants."

As someone who grew up on extreme sports games, I know what I want: the next Tony Hawk. The next SSX. The next Skate. If not in name, then in spirit. And Descenders has spirit.