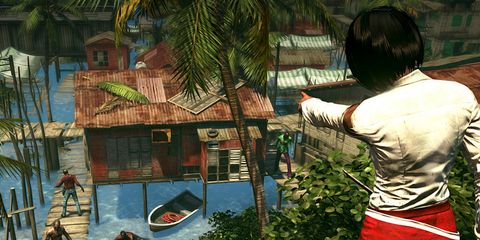 Dead Island doesn't exactly have a sterling reputation. Techland's open-world zombie adventure was rife with game-breaking bugs when it launched in 2011, so we couldn't help but approach Dead Island Riptide with a healthy dose of cautious optimism. Thankfully this sequel only reanimates the fun (and quirky) parts of its predecessor, leaving a vast majority of its plaguing technical issues to rot in the ground, never to return. Riptide is the more polished experience the original should've been, and is an immensely addictive and enjoyable open-world game in its own right.

It picks up right where Dead Island left off, with the four original protagonists (as well as a new playable fifth) finding themselves shipwrecked on the island of Palanai. Riptide doesn't make a great first impression, though. The prologue is boring and uninteresting, serving as a clumsy attempt to bridge the story to that of its predecessor, and its waypoint system tends to work only when it feels like it. But once you start digging into the quests on Palanai, Riptide becomes considerably more enjoyable. There's a ton of zombies to kill, plenty of flooded areas to explore (because flooding is apparently Riptide's thing), and lots of cash and weapons to find.

Like Dead Island's Banoi, Palanai is a seemingly beautiful place at first. It's home to flowing waterfalls, sandy beaches, and several flooded inland villages, all of which are gorgeous to behold, especially on a decent gaming PC. But it doesn't take long before white sands give way to the blood-soaked beaches and gruesome carnage left behind in the wake of a nasty zombie outbreak. The immersive atmosphere here is impressive; environmental clues and chilling audio diaries provide plenty of context regarding the fate of Palanai's unlucky inhabitants, and these subtle details tell a far more interesting story than the comparatively dull (and overly familiar) main quest arc. Though its story falls flat, Riptide still manages to build and maintain an immense amount of tension. There's rarely a reprieve from the onslaught of the undead's guttural moans and shrieks, which are constant reminders that every inch of Palanai is inhabited by something whose sole interest involves eating you alive.

Finding the sources of said moans and shrieks and subsequently bashing their skulls in is the primary reason you'll play through Riptide's 18-hour campaign. Each of the playable characters is proficient with certain types of weapons and has a unique set of skill trees, providing some incentive for multiple playthroughs. Washed up rapper Sam B, for instance, is particularly good with a sledgehammer and can be specced to withstand a ton of damage, while newcomer John Morgan is adept at powerful running jump kicks that send zombies flying (a hilarious spectacle).

The brutal, weighty melee combat is a well-designed experience you won't find anywhere else, and it's something you'll encounter a lot of regardless of which character you choose to play. You'll really get a sense of the momentum that comes with swinging a giant maul, especially when the force of its impact turns a zombie's head into chunks of mush. Most encounters only pit you against a couple zombies at a time, but bigger engagements are sprinkled throughout, providing a high level of challenge (and, for console players, some troublesome frame rate dips).

Don't expect to just run into a group of zombies swinging like a madman, though; each undead walker can dish out a lot of damage and you'll have to be mindful of your stamina meter, which drains with each swing. You'll be susceptible to getting knocked off your feet once it's depleted--that's bad news if a few flesh-eaters are nearby. For a bunch of mindless creatures driven by instinct, zombies in Riptide are good at sneaking up on you when you're not paying attention. As in Dead Island, weapons degrade as you use them, but a plentiful number of repair benches and significant adjustments to the auto-save system mean you won't ever find yourself stuck in a checkpoint where you're equipped with broken armaments and surrounded by powerful enemies. Battles are persistently fun, a much-welcomed change compared to Dead Island's crippling design elements.

Of course, the combat wouldn't be quite as exciting if it weren't for all the loot it inevitably leads to. As you complete quests and explore, you'll come across dozens of weapons and items, including swords, grenades, explosive mines, Wolverine claws (seriously), firearms, and tons of other instruments of death. Most of these can be upgraded and modded to become even stronger. Jamming a bunch of nails through the business end of a baseball bat makes it a tad bit deadlier, as does strapping torches to both ends of a bo staff. Even guns--which are far more powerful in Riptide than they were in Dead Island--can be modded to add shock damage or other types of additional effects. The seemingly endless variations of weapons and the quick rate at which you'll replace old ones will turn even modest looters into full-blown addicts.

Solo play is a far more viable option than it was in Dead Island, and going it alone makes for an intense, atmospheric survival experience. Add a few friends to the mix, though, and things get exponentially goofier. Watching other characters drop kick zombies from a high ledge--a new thing anyone can do--is hilarious, as is witnessing your pals swing at the special infected zombies with boat oars and katanas (though this has the side effect of making Riptide's janky character animations become super obvious). It's easy to hop in a game, and a scaling mechanic means you can contribute even if you join the game of a high-level player, eliminating basically any barrier from playing with your friends whenever you want.

Considering Riptide's large scope, it's a surprisingly smooth ride. Its addicting zombie-slaying action, dozens of interesting weapons, and immersive qualities far outweigh its dull story and occasional technical hiccups, the latter of which pale in comparison to those of the original. This outshines its predecessor in almost every conceivable way--and once it sinks its teeth into your time, Riptide is a hard game to put down.