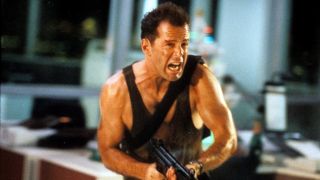 It might be the most hotly-debated topic in all of film: is Die Hard a Christmas movie? Bruce Willis has even chimed in recently to let us all know that Die Hard isn’t a Christmas film. But you know what, Brucie? You’re wrong. In fact, 86% of GamesRadar+ readers think Die Hard *is* a festive flick, as voted for by 709 of 845 voters in our recent on-site poll. I’m going to prove it the old-fashioned way: through a list on the internet. Don’t @ me, McClane.

The music over Die Hard’s closing credits is Let It Snow. I could just end the argument there but my editors tell me I have to do that whole ‘writing words’ thing. So, how about this: what’s the first song you hear in the opening seconds of Die Hard? Yes, it’s a Christmas song. Ok, it’s Christmas in Hollis by Run DMC – not likely to top any best-of Christmas compilations – but it’s the perfect summation of why Die Hard is a Christmas movie. Sure, it’s not like any Christmas song you may know, but it’s Christmas in its own inimitable way, gritty, loud, and full of ‘80s charm. Die Hard does the same thing with its rendition of Christmas, just with a few dozen more explosions.

John McClane is squeezing through gaps on a silent night. Sound familiar?

Think Die Hard and there’s a pretty good chance you’ll also think Bruce Willis clambering his way through the vent system at Nakatomi Plaza. It’s as iconic as yippee-ki-yay and it also really hammers home the festive theme. That’s because John McClane is Santa. No, not literally (but who knows what future Die Hard sequels have in store for us?), but he’s sure making good work of helping out his kids by delivering to them the present of a happy, healthy Christmas. And he does so by channelling his inner-Saint Nick, silently creeping through the metal corridors on his way to the proverbial milk and cookies that is throwing Hans Gruber from a 30-foot building. If that’s not the true meaning of Christmas, I don’t know what is.

John McClane has his own little helper

The big guy can’t get much done without a sidekick. Standing at only 5’8 (trust me, I Googled this to make a point), Al Powell is McClane’s eyes and ears and outside Nakatomi Plaza. His name even sounds like Pole. Santa may have his elves, but Bruce Willis has Al Powell, policeman extraordinaire. What more proof do you need that this is a Christmas movie? All he’s missing is a pointy hat.

It's set during a Christmas party... On Christmas Eve

Die Hard could have been set on a rainy Tuesday in November and it wouldn’t have mattered one jot. But this a hostage situation that takes place hours before the clock strikes midnight to ring in Christmas Day. Coincidence? I think not. This is all very deliberately set up to instil some Christmas cheer into the audience, from its decorations to a very festive office party filled with employees (minus the awkward backroom shenanigans and drunken antics they’ll turn crimson at first Monday back, I’ll bet). Yeah, it was released in July in the US, but guess what some Americans celebrate every year? That’s right: Christmas in July. Care to offer a counter-point, Christmas movie conspiracy theorists?

It’s a Christmas tradition. Everyone gathers round and basks in the glow as a stack of chestnuts are warmly toasted over a fire on a cold, brisk winter’s day. Except, in Die Hard’s case replace ‘chestnuts’ with an unfortunate police officer sitting in his service car and ‘roasting’ while being blown to smithereens by a military-grade RPG (see the GIF above). Poor chap. Still, at least he didn’t freeze to death. It always looked a bit nippy outside Nakatomi Plaza.

It's all about family

The best Christmas movies are about what it means to be home with your loved ones at Christmas – and Die Hard is no exception. John McClane kicks off the movie by going all Chris Rea and driving home for Christmas. His wife Holly, who he’s not on the best of terms with at the movie’s opening, is eventually back by John’s side by the end thanks to the magic of Christmas. And saving her from the clutches of a strange German man. Happy Holidays!

I couldn’t leave out the movie’s most iconic, overtly Christmas line, could I? Whether it’s Alan Rickman’s strained repetition of Ho-Ho-Ho, the Santa hat his dead henchman has draped over his lifeless head, or the thought of movie-goers getting an extra present in the shape of a machine gun-toting Bruce Willis. This is Christmas wrapped up in a perfect package, all thanks to a 10-second clip, which you can see below:

Hans Gruber is secretly the Grinch

Wants to ruin Christmas? Check. Has an incredible disdain for others? Check. Places himself on a lofty perch so he can look out on the lowly citizens below? Check. Scraggly facial fuzz? Double check. Even Alan Rickman’s dialogue is positively Seussian in its delivery. It all adds up to a foil for John McClane saving Christmas with the help of some C4 and – the final present – a wristwatch for his wife saving the day, like a hurried husband feverishly flitting through Amazon on Christmas Eve and clicking on any flash deal he can find.

The sequel has a guy named Klaus

Die Hard may have hidden some of its more Christmassy conceits, but a later Die Hard movie does no such thing. Jeremy Irons’ elder Gruber sibling in Die Hard with a Vengeance has his own henchman called Klaus... Check and mate, Willis. Check. And. Mate.

Why there is no greater art form than the terrible Christmas movie with special respects to The Dog Who Saved Christmas.