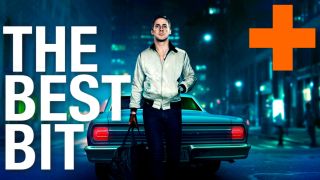 Drive is a stark film. It doesn’t tell you any more than is necessary. It doesn’t bog the plot down with exposition preferring to keep the conversation realistically brief. A neo-noir crime film about a stuntman - the nameless Driver - who works as a getaway driver at night who gets dragged into his neighbour’s dabbling with the crime underworld, it never lets you get too close to the characters. As a result we’re never certain what’s going inside the Driver and his neighbour Irene’s heads, but their faces do more than enough to make up for the silence. Not strange then, that a movie so devoid of dialogue should reward you for paying attention to what few words there are - especially when all the clues lie in the songs pulsing through the scenes. Its trio of half-melancholy songs tell us everything we thought was being kept quiet.

The powerful synth beats are assertive enough to hold their own against the intense events that play out. Hearkening back to the ‘80s when muscle cars dominated the roads and came hand-in-hand with performative masculinity (think brash, buff, stonewashed-jeans-wearing jocks), at first the music seems to remind you of everything the Driver is not. He’s quiet. Understated. Yet just like the consciously synth-retro music, there’s something of the showman in him, with his scorpion jacket, driving gloves, and toothpick. He’s got flair. Don’t be fooled, though: the Driver might not bare his soul to prove this assumption wrong, but the music sure does.

In place of lengthy, heart-baring monologues to explain how the Driver isn’t a criminal who has a penchant for the thrum of a car engine is Drive’s soundtrack. A mix of half-retro ‘80s synth pulses out of the screen, its trinity of songs filled with bare, subtlely-honest lyrics which reveal the Driver’s hidden characteristics. Have a listen to Nightcall by Kavinsky, Under Your Spell by Desire, and (the most revealing of the trio) A Real Hero by College featuring Electric Youth. To start off, Under Your Spell is a testimony to how Irene and the Driver feel about each other, and its hypnotic repetition lulls you into the same kind of daze that comes with driving down an open road.

Same goes for Nightcall. With identical verses repeated over and over, you’re forced to pay attention to what it’s saying about both the Driver and the plot. Listen: “I'm gonna show you where it's dark, but have no fear” points towards the Driver’s edge, towards his subtle malice which could be mistaken for shyness. Yet you’re safe with him. “They're talking about you boy// But you're still the same” even foreshadows the ending - how unchanged the Driver remains throughout the movie, and so, poignantly, how he’ll never change to stay with Irene. He leaves, remaining mysterious and elusive - because if he went back to settle down with her, he wouldn’t be the Driver.

Finally, if you want to peer inside his head and be given some clues about how to think of him, turn on A Real Hero. The lyrics tell all you need to know about Gosling’s silent stuntman: “You're emotionally complex // Against the grain of dystopic claims // Not the thoughts your actions entertain”. Some have “dystopic claims” about the Driver, thinking he’s psycho or inherently dangerous, not really taking the time to think about his actions and consider why he does what he does.

Could he possibly have saved Irene because he… cares? No, surely not. He smashed a guy’s hand with a hammer, for christ’s sake. Plus, his oblique reference to the scorpion and the frog fable (look it up and bear his jacket in mind) surely tells us he’s the scorpion; he cannot and will not change, even when endangers him and those he cares about.

Yet A Real Hero doesn’t want us to sign him off. The Driver is “a real human being and a real hero”. Clearing up the moral ambiguity of the film, the song tells us that despite the fact that the Driver is calmly inclined to exercise extreme violence and at other times is inscrutably quiet, he’s still only human. He has his reasons.

The dreamy repetition in all three songs will stay with you long after you’ve finished watching the movie. Providing answers to what might come next for the Driver, there’s an inkling that just like the lines that get sung over and over, the Driver doesn’t stop either. He arrived out of the blue at Shannon’s garage asking for a job, offering no information about his past. Maybe those events will repeat themselves after the ending of Drive. His modus operandi might be to get in too deep, tie up all the loose ends, and start anew in a different city; a blank slate who has as much repetition in his life as Under Your Spell.

Demonstrating how important a good soundtrack is, Drive’s music doesn’t just get you in the right frame of mind to watch a film that at first just seems to be about everything that’s urban: driving, crime, a busy city turning relationships messy. Yet Drive is really about one person’s dedication to another. With most of his reasoning left to the imagination, the soundtrack gives you all the information you need to understand the Driver. It’s a blueprint to his psyche. Read it right, and there’s all the answers you’ll ever need.