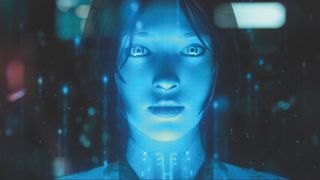 The Xbox One dashboard is getting another redesign and it's bidding farewell to Cortana. Not the original Cortana - you can still hang out with her in the Halo games - but the Cortana voice assistant that also appears on other Microsoft devices. Certain Xbox Insider Program members can start trying out the changes this week, and they'll also notice some more front-end tweaks to the console's interface that are meant to make games easier to launch straight from start-up.

Cortana support was only added to Xbox One last fall, making her Xbox residency short-lived even in Xbox UI revision terms. The Xbox Wire announcement confirms Microsoft's voice assistant will still be able to interact with the system via your phone or other Cortana-enabled device, you just won't be able to talk to her straight through your Xbox One headset or Kinect. Members of the Insiders Program Alpha Skip Ahead ring can start trying out these changes this week, while they'll roll out to everyone in the fall.

Speaking of Kinect, those voice commands are still supported on the system. It's kind of confusing, but Microsoft actually had two of its own voice-control solutions on Xbox One at once, and as of this update it's back to just having the one. Here's a verified member of the Xbox product team confirming that the good ol' "Xbox On" remains even in this new update.

Microsoft says the update also brings a "streamlined user interface" for the Home screen for Alpha and Alpha Skip Ahead members to try. It replaces Twists (those things at the top) with separate buttons for launching games faster, and it moves some other elements around to make more room for recently played games on the interface. Microsoft says it plans to keep changing the Home screen in response to feedback, so expect more adjustments in the future.

Find more to play with our list of the best Xbox One exclusives.