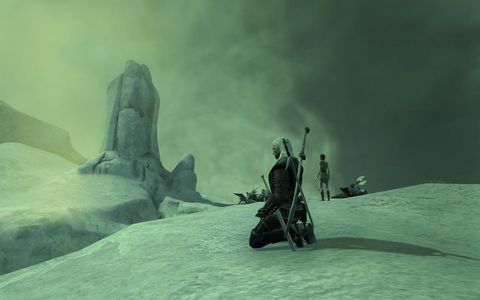 Not many games get a second chance, but we’re glad that The Witcher is one of them. We went into it the first time around with low expectations, and after an opening chapter so boring you could use it to mine for diamonds, came out grinning at the first genuinely good, ‘proper’ RPG in years. There. We admit it. We liked it a lot. Behind the fiddly controls, constant wandering from A to B and back to A and then bloody B again, and silly stuff like the nudie cards after each gratuitous bonk, it offered everything recent RPGs have lacked. Genuine moral dilemmas. Fun characters. A fantasy world with a sense of personality, if a seriously nasty one. And to think, I almost microwaved the DVD.

This Enhanced Edition is an interesting re-release. Cosmetically, it’s much the same. New features include being able to Ctrl-click on corpses to auto-loot them, a slightly reworked inventory with a special slot for alchemy components, and supposedly more variety in NPCs, although not enough to stop it feeling like you’re meeting the same clones every few steps. In addition to the original campaign, you also get two smaller adventures – The Price of Neutrality, as released with the campaign editing tools a few months back, and a new one, Side Effects.

However, all this is just bonus content compared to the big addition – the new script. For reasons too silly to go into here, the original version’s translation didn’t so much get cut down as slashed to bits with a machete. Since then, the developers have scraped together the cash to pull the actors back into the studio, re-record a few thousand lines and slot them in. It’s exactly what the witcher doctor ordered... as far as it goes. The replacement lines are a massive improvement, but they’re resolutely a patch-job, not a full rewrite. Where before a question might be simply “Murderers?” you now get “Why do you say I work for murderers?” or extra flavor text such as “that flea‑ridden hick” instead of simply “Odo.” Go in expecting Geralt’s adventures through the land of tits and racism to suddenly smack of a Chris Avellone/Dostoyevsky tag-team, and you’re going to be disappointed. There are plenty of rough edges and dodgy conversations left over, not least the incoherent innkeeper from the very start of the game. They’re just not constantly shoved in your face any more, letting you focus on the bits that actually matter.

If you passed on The Witcher the first time around, the Enhanced Edition is a great second chance on both sides of the screen. If you already own it, it’s a free patch. Even better.