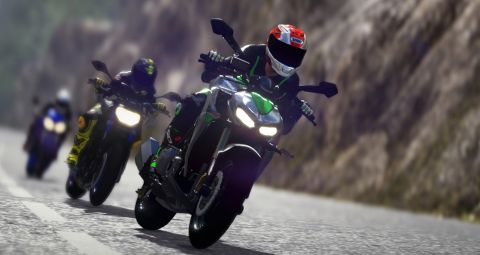 Pleasant to play and easy to pick up. However, the last-gen feeling and lack of atmosphere mean Ride is only a mid-pack racer.

There's a particular corner on the Potrero track that can be taken flat out at high speed, but only if you got the preceding corner absolutely right. This sweeping left-right section represents a perfect microcosm of the Ride experience. Your patience, discipline, forward-planning, and applied knowledge are rewarded with a massively gratifying sensation of 'nailed it', as your simulated superbike hurtles around a banked curve and straightens up at some 150mph, a few feet from the barrier on the left, close enough to high-five the cookie-cutter spectators. You won at that corner. But are you similarly prepared for the next one?

You might have noticed there weren’t any other bikes mentioned in that scenario. That's because Ride is at its best when it's just you vs. the tarmac. It's about how it feels to own a beautiful motorbike and take it out on race tracks or public roads. It echoes Gran Turismo in its reverence for the act of manipulating the controls of gleaming machines of speed, but as GT5 proved, that doesn't automatically make it a great game.

Sure enough, racing against the AI is less than majestic. Events are often populated by bikes of varying power, meaning some will zoom off while others fall behind. Getting into a close race is possible at higher difficulties, but while you can almost always find a better cornering line than the overly-conservative AI riders, they seem to find extra acceleration from somewhere and pass you again on the straights. As a result, it's rare to feel fully satisfied at the end of a race.

There are other event types besides straight races, such as overtaking challenges (which work better as it's essentially you vs. mobile obstacles rather than racers), and even drag events where you can tinker with your bike's setup to get the optimum time over each set distance.

Real-world racetracks Imola, Sugo, Donington, Road America, Magny Cours and Potrero de los Funes Circuit are all lovingly recreated in Ride. They can look a little sterile and overly-clean, but not half as much as the original tracks. The French Riviera in particular really looks like a CG diorama. Of course, that's exactly what it is but you shouldn't be constantly aware of that. Elements of the Kanto circuit look pretty, but Driveclub's done Japanese scenery already, and many times more impressively, making it hard to get excited about Ride's vistas.

There are screen after screen of different themed events to try, categorised clearly, again echoing Gran Turismo. There are increasingly exotic purchases to make, a simulated world leaderboard to chart your progress, and bronze-to-gold ranks to prove you've mastered each category. Unlike GT, however, you don't need to complete license tests; as long as you can afford an eligible bike, you can enter any event. Very refreshing.

Even though Ride is notable for being Milestone's first attempt at an original, non-branded racing game after various MotoGP, MXGP and WRC outings, it certainly doesn't lack big names from the real world. There are 14 licensed manufacturers including Suzuki, Ducati, Yamaha, Kawasaki and Triumph, totalling some 114 bikes available to win or purchase with in-game credits. The bikes really are the stars of the show and the love that's gone into rendering them is evident. Lingering camera shots pick out tiny details in their bodywork and dazzling reflection effects kick is as the sun glints off metal wheel rims in the free camera photo mode.

Sadly, the same can't really be said of the environments. While some standouts like the dense woodland of the Sierra Nevada original circuit (can't help but think of Road Rash when that one's loading up) look pretty, most look disappointingly synthetic. With obvious texture repetition - especially at speed - and flat-looking hills, the fact it's running in 1080p just exaggerates the comparatively simplistic nature of the scenery and its unconvincing lighting. When you're used to Driveclub's exceptional visual quality across the board, this feels like a last-gen game and your emotional investment takes a big hit as a result.

Even so, the track layouts (both real and original) offer substantial challenge and, in turn, satisfying play. It's a bit like healthy food. Cabbage, maybe. It isn't massively tasty, but it's been cooked proficiently and you feel like it's doing you good. In fact, continuing that unlikely food metaphor, Ride won't chew you up and spit you out like most bike sims. It's way more accessible than its peers. Most of Milestone's other racers are notable for the amount of time most people spend falling arse-over-tit through gravel traps because realistic simulations of powerful motorbikes are simply too much for poor Average Joe's co-ordination. That's why your next-door neighbour isn't a world superbike champion. But also the reason why Ride's World Tour mode should be applauded.

You're eased into the action with 'Naked' bikes (which did make me wonder how they got away with a PEGI-3 rating), which are comparatively low-powered affairs. Blissfully, they're really hard to fall off. It makes such a difference to have a bike sim where realism doesn't have to equal frustration. As long as you appreciate you'll have to brake for the corners, you'll be able to play Ride. And if you forget, there's the now-obligatory rewind function so you can try again. Later classes like superbikes and classic superbikes are harder to keep upright, but by that point you should understand what you're doing wrong. It works.

There are also the usual assists like dynamic racing lines, auto-braking and other such tiresome things, but I urge you to switch them off. With manual gears enabled, independent front and back wheel braking on separate buttons, and the manual 'tuck' for minimising rider wind resistance on the straights, successfully taming each new beast feels wonderful. The movement of the bike in isolation is just beautiful. It twitches when it should, leans like it should… I honestly couldn't suggest how it could be improved.

If only the same quality was evident in all aspects of the game. From the creepy, overly-passionate voiceover that introduces each event type, through to the photo mode (every game's gotta have one these days), it's clear that this is a celebration of bikes just as much as it is a bike game. But ultimately, the experience is best described as 'pleasant'. While it doesn't commit any massive crimes, the atmosphere, visuals and excitement levels are far short of the standard set by even last-gen racers like GT6. And though its PS4 stablemate MotoGP14 may be harder to control, it's a better video game. And that makes a big difference.

Pleasant to play and easy to pick up. However, the last-gen feeling and lack of atmosphere mean Ride is only a mid-pack racer.