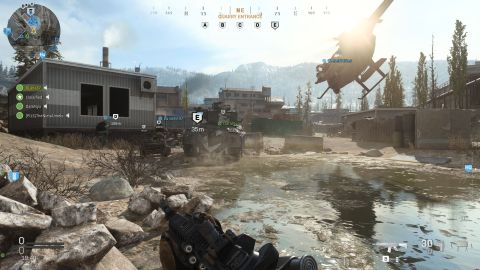 Because of its scale and ferocity, getting acquainted with Ground War can be a baptism of fire. So we’ve compiled a few starting tips to keep you in the fight for longer and maximise that K/D ratio.

Stick with your Squad

Ground War is a team-based scenario, with each 32-player team split into squads of four. When you first start out in Ground War, it’s a good idea to stick with those teammates while you get to know with the map’s layout. The rooftops and mountainsides of Ground War’s three maps are the perfect hiding places for snipers, and their favourite targets are new players who break off from their squad and charge heedless into the fray.

Since your squad-mates are likely to be more familiar with the map then you, following them will minimise the risk of having your head ventilated. Working with your squad also makes it easier to get your eye-in during those initial hours. Not only will working together help you identify opponents, it also means enemy players have more than one target to contend with, meaning you won’t be the sole focus of their shots.

When you start off in Ground War, it’s tempting to be aggressive, charging into the thick of the action. This is a good way to spend lots of time looking at the spawn menu. If you capture a control point, instead of running off to capture another, sometimes it’s better to defend the one you’re currently holding. Find a secure position with a decent view of the control point, then wait for the enemy to come to you. Not only does this give you the element of surprise, it also help your team out, as most players tend to prioritise attack over defence.

If you find yourself doing a lot of defensive play, then once you’ve levelled up a couple of times, it’s worth switching out your frag grenades for claymore mines, and placing one in a doorway you can’t cover so that anyone trying to sneak up on you gets a nasty surprise. Don’t stick in one spot for too long, however. Enemy players will eventually figure out your position, and make it their personal mission to permanently remove you from it.

Sprinting might get you into combat faster, but it’s also likely to get you killed faster too. Ground War’s maps are mazy, complicated affairs, with lots of blind corners, elevated sniping positions, and rooms with multiple entry and exit points. Because of this, it’s often better to use a more tactical approach. When you enter a room, do so with your sights up and check your corners. If you’re approaching an enemy control point, chuck in a flash or stun grenade before entering. If you get into a close-quarters gunfight and there’s no nearby cover, drop to the ground, as this minimises your target profile and throws off enemy aim, as most players expect their opponents to run or jump to avoid gunfire.

Ground War lets players spawn with a variety of deployable equipment. By default, this is set to an ammo pack. This can be useful in the right circumstances, but it’s also easy to forget you have it in the thick of the action. Instead, switch it out for the pilotable drone. Flying this around the map will let you tag enemies for your team, earning you XP and making it easier for your team to identify and eliminate snipers and played holed up defending control points. Just make sure you’re in a relatively well-hidden position before using it, as you’ll be unable to defend yourself while flying the drone.

No matter how cautious you are, when you start off in Ground War you’re going to die. A lot. Even in death, however, you can still help your team, as spawning in the right place can help pile the pressure on your opponents, helping you to grab a contested control point, or defend one of your own under attack.

Ground War offers multiple ways to get back into the action fast. You can respawn at your home base, or any control point that your team currently holds. You can also respawn on a member of your squad, provided they aren’t currently engaged in a firefight. This is a particularly good way to get back into the action quickly. Lastly, bear in mind that APCs act as mobile spawn points. If you see one loitering around your main base, it’s worth hopping in and driving it near an enemy control point.