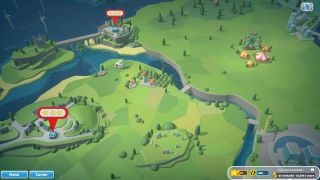 It's easy to imagine the vales, mountains and weird nuclear wastelands of Two Point County filled with more than the multitude of hospitals that make up the core game, and accompanying DLCs for Two Point Hospital. From the Two Point Radio station hosts to the celebrities that pop in under the guise of VIP visits, the County is already taking on its own personality. And thankfully, developer Two Point Studios has big plans for its little simulated world.

At a recent event showing off Two Point Hospital running on PS4, Xbox One and Nintendo Switch, I got the chance to sit down with Two Point Studios' three co-founders to talk about the Two Point County, and the future for the team – especially now that it has been officially acquired by Sega. The Studios' three co-founders comprise of Mark Webley, Gary Carr and Ben Hymers. Webley and Carr both worked on Theme Park back in the '90s, and Webley went on to co-found Lionhead Studios to make Black & White, and more.

The pair also worked together on Theme Hospital, so you can see exactly where the skills to make Two Point Hospital has come from. Hymers, on the other hand, is ex-Rare and ex-Creative Assembly, and was working on a simulation incubation within Rare when Carr and Webley approached him. It's clear that this is a fledgeling studio with some serious experience, and I, for one, am excited to see where the team take Two Point next.

"[Two Point Hospital was] always a start point," explains Carr. "[Two Point County] wasn't anything else, really. It was a place that we could pour our ideas into it. So it's a world, basically."

"I think, eventually, we won't be talking about what the subject matter is of Two Point County, whether it's a hospital or another [idea]," he continues. "We're going to have what you imagine in any kind of world or any soap opera… that will work in our game. Ordinary relatable themes, which people have an opinion on – you know, people have an opinion on the transport system; the people have an opinion on healthcare; or how a country's run. I think ordinary subjects can make for interesting Two Point games, because we can really lampoon, twist, and exaggerate them. I think sometimes, if you go too fantastical with an idea, it's difficult to take it anywhere – with something like fantasy or space there's no route through that."

"You think you know how a hospital runs. You probably don't," jokes Webley.

The guys laugh about Two Point Motorway Services as another possible game, or even sewage centres, or another about managing roundabout systems in Basingstoke (which is a very niche British joke that I don't expect everyone but a certain subset of readers to truly appreciate). They're not ready to talk about what the next addition to Two Point County is likely to be, but it's clear they're thinking through all creative avenues. "In fact, the challenge is the more rubbish the subject matter the more we're into doing that," Carr chuckles.

"We always went for something that was easily accessible. Something you could relate to," explains Webley of the team's choices at Bullfrog, and now at Two Point Studios. "I think if we can get someone playing for half an hour, then maybe they can play it for two hours. And suddenly they're playing a sim game, and they don't even like sim games. That was always our approach, and a lot of the Bullfrog games were like that, and some of the earlier Lionhead stuff. It was something nice and accessible."

"And then you're a few hours in [to Two Point Hospital], and then you have to train people, and you have to research, and do surgery. We're slowly introducing things. I think that was the core bit of it, and I think our vision for Two Point County was what we wanted to do the same with. We're starting with this subject, but we've got a whole bunch of ideas that we think would go really nicely – not in the same game loop, but in the same vein. It's little people, personalities, different parts of the world having different problems or challenges."

The team see Two Point County as a version of The Simpsons' Springfield in some ways. It's a space that can continue to evolve, a place that can change to suit creative pursuits. "You've got this little microcosm of all these different things, but it's all familiar. You go to Moe's Tavern. You know the characters, and the settings are all different," Webley tells me.

I imagine that'll involve some of the quirkier characters of Two Point Hospital showing up elsewhere in Two Point County. Like the trio of brilliant Two Point Radio hosts, Harrison Wolff, Sir Nigel Bickleworth and Ricky Hawthorn, or the VIP visitors like the Health Inspector Henry Jobsworth, mayor Tabitha Windsock, or local pop star of questionable talent Jasmine Odyssey. The more you play Two Point Hospital, the more you get to know these characters and find yourself immersed in the world of Two Point County – even if you are just moving from hospital to hospital.

But whatever comes next, you just know that it's going to have the team's trademark – and regularly quite British and slapstick – humour attached to it. Whether you're ready to see what Two Point Studios can make of other career paths or national services, I just know it's going to be hilarious, and a glorious way to waste time.

Until Two Point Hospital hits consoles, why not check out our picks of the best games like the Sims to keep you busy...