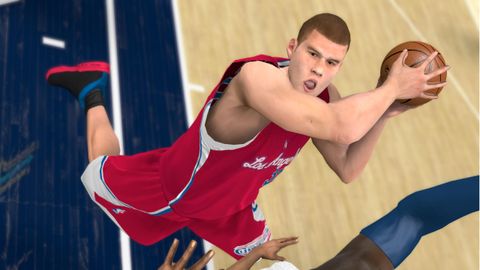 Michael Jordan towered over the NBA during his reign like no one before or since. His Airness similarly dominates NBA 2K11, transforming what would have been another sure-it’s-good-but-we’ve-seen-this-all-before game into a genre-busting standout. It’s been awhile since MJ has been in our collective consciousness, but he’s still got crazy hoops mojo; 2K Sports’ representation of his greatest moments is a great idea executed perfectly.

The meaty Jordan campaign is exquisite. Playing as him during various incarnations throughout his legendary Bulls tenure, we marveled at how brilliantly he comes alive on screen. Jordan is truly Jordan, not just a videogame character with superb stat attributes. The famous dunks, the tongue, and the on-court mannerisms are uncanny, and his evolution from a skinny, high-flying youngster to a hoops maestro is fully evident. The fun doesn’t stop once you complete the ten challenging scenarios either – you then get to use a raw-as-raw-gets Jordan as a rookie in the My Player mode on any team you want. Bravo!

Another superb aspect of the Jordan Challenge is that other historical teams are resurrected (like we’ve been begging for). Whether or not you agree that the ’86 Celtics are the best team ever, it’s a delight to play as or against Bird, McHale, Parrish, and company (even if some of their likenesses up close aren’t kind). There’s a decent number of these squads available, including Magic’s Lakers and Malone’s Jazz, among others. Unfortunately they’re not usable in any format other than quick games or the Jordan-specific matches – we would’ve loved to create tournaments or taken them online.

Oh yeah – there is another entire game attached to 2K11, one any sim hoops fan is extremely familiar with. 2K’s got an improved franchise mode (both presentation and AI are beefed up), minigames, playoffs, and expansive online offerings. But you already knew that. There’ve been some significant tweaks to the on-court action as well; the game feels a bit more challenging on the standard difficulty than years past.

Controlling the action is a dizzying affair; depending on what kind of player you are, it’s a curse or a blessing. The criminally thin manual provided with the game sheds light on maybe 5% of the controls; the “real” manual available online reveals an obscene amount of options you have to run plays, maneuver in the post, and move with and without the ball. Unless you’re playing on the easiest setting, using Jordan exclusively, or the Move’s simpler motion controls, you’ll need to study these moves to have any chance of long-term success. NBA 2K11 is the most realistic and in-depth hoops game yet, but it’s also the most complex. Allen Iverson would be disgusted with the amount of practice it takes to win.

No hoops junkie should miss NBA 2K11. It’s not just another yearly update with some obligatory back-of-the-box modifications; it’s a loving study of the greatest player of his generation and his biggest rivals, played out with beautiful sights and sounds that remind us just how great the Air Jordan era was.