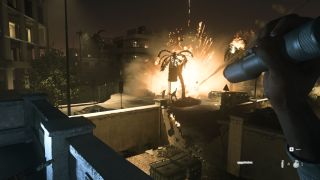 As part of its authentic portrayal of today’s combat scenarios, Call of Duty: Modern Warfare loves a bit of military jargon. Its back-and-forth chatter between soldiers and radio operators is all FOBs, PIDs, IEDs, and DVDs.

Ok, maybe not the last one.

For the uninitiated, this frequent use of acronyms and technical phrases can be a little disorienting, so we’ve put together this short guide to help you familiarise yourself with the language of Modern Warfare.

Let’s start with some of those acronyms. All of the missions for Call of Duty’s campaign take place within the AO  - the area of operations. The FOB is the forward operating base from which your team deploys. The initial goal of your campaign is to track down The Wolf, the leader of Al Qatada, believed to be responsible for a terror attack in London. As part of this, you need to make a Positive identification (PID), before attempting to apprehend the target. Lastly, an IED is an improvised explosive device. You’ll frequently encounter IEDs in your AO, but if you find IEDs in your FOB, you’ve got a big problem.

Radio communication is a vital element of Modern Warfare. You’ll regularly hear characters in your team communicating with their mission handlers back home. To ensure consistency in communications, the key individual in your team utilise unique Call-Signs. For example, Captain Price’s callsign is Bravo Zero-Six, whereas the CIA operative known as “Alex” uses the callsign Echo-Three One.

Military communications also utilise more specific code-phrases to further detail who is speaking, who a communication is for, and the conditions under which the communication is being made. For example, “Actual” refers specifically to the unit leader, and can be used by mission handlers to send a message direct to that individual, or by the unit leader to clarify it is them who is speaking. If you hear an operator say they’re “In the blind”, this means the speaker is letting the receiver know they cannot or may not be able to hear any response to their message.

During combat scenarios, soldiers and unit leaders will use a variety of formal and informal terms to describe their situation. If you unit leader asks you to take point, then they want you to adopt the forward assault position in the unit formation. If they ask you to take the main, however, that means they want you to enter the room or building you’re approaching via the main entrance. Targets are identified simply using the word “target”. If your squad-mates refer to an individual as “X-Ray”, however, this means that person is an unknown element.

Many areas of Urzikstan (the fictional country in which much of Modern Warfare takes place) are “target rich environments” in which viable targets are often intermingled with X-Rays and civilians. In such situations, you may be asked to “check your shots”, meaning ensure what you have in your sights is a viable target before pulling the trigger. But check you shots also be used to mean “watch your ammo”, such as during protracted firefights where the ability to resupply is limited, and ensuring every bullet counts is crucial.

Finally, if you hear your squad leader call for artillery at “Danger Close”, keep your head down, because all hell is about to break loose within a few tens of metres of you, and you really don’t want to be caught in that firestorm. Understanding your military terminology can literally mean the difference between life and death.