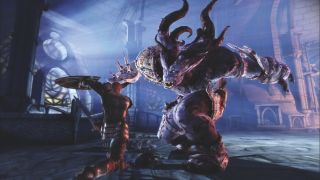 It’s hard to believe that two months separated the first game in the Dragon Age series and the sequel to Mass Effect. They feel like RPGs from different eras: Mass Effect 2 is a modern-feeling shooter hybrid that moves away from traditional elements like lists of stats, while Dragon Age: Origins is a spiritual successor to BioWare’s PC game Baldur’s Gate, with a complex combat system and customisation options.

The latter was the last gasp of the BioWare era that encompassed Jade Empire and Knights Of The Old Republic on the original Xbox – and you can really tell. These visuals seemed dated even in 2009, and today it looks pretty hideous. But looking ugly wasn’t enough to stop Origins from becoming a hit, and in the canon of Xbox RPGs, there aren’t many games that offer such a hardcore experience.

Depending on the type of player you are, this is either one of BioWare’s best RPGs or its weakest; it all depends on what you want from the genre. If it’s complex storytelling and characters, there are only infrequent flashes in Origins; if you prioritise combat that rewards strategy and customisation, this is perhaps its strongest work.

At the start of Origins, you need to choose one of six brief stories to play out before the main quest begins. Whether you’re an elf mistreated in the slums of a city, or a human with a wealthy but soon-to-be-doomed family, each short story gives you a sense of personal motivation before you’re thrust into the main arc. You customise your character’s gender, appearance and attitude. This collectively sells the idea that you’re from just one corner of a gigantic fantasy world with a lot of moving parts. Throughout the game you’re also presented with conversation choices and situations that are specific to your choice of race and background – indeed, Origins has 68,920 lines of dialogue, which is over a third more than Mass Effect 3. This accounts for a lot of different scenarios per player.

Whichever path you pick, you are destined to become a Grey Warden, one of the warriors tasked with saving Ferelden from the archdemon (basically a big-ass dragon) and the army of Darkspawn (orcs and trolls), by rallying the land’s various factions using special treaties. These include the dwarves of Orzammar, the Dalish elves, the Circle of Magi and the human army at Redcliff. Before taking on the archdemon, you must contend with the treacherous Teyrn Loghain, who left King Cailan to die at the hands of the Darkspawn and has now put a bounty on your head. Jeez.

If any of that fantasy waffle sounds generic, that’s because it sort of is – Origins initially feels deliberately like a pastiche, much in the same way you can easily pick out Mass Effect’s sci-fi influences. It took a long time for the game to click with me on my first playthrough – there was a three-year gap between me starting and finishing the game, which I attribute to a slow opening ten hours. There’s a lot of scene-setting in the first act, and the game is full of optional codexes that I never want to read.

I must admit that Origins still leaves me slightly cold, even after pouring more than 100 total hours into the game. There’s an awful lot of micromanagement-intensive combat in boring locations, and the world’s presentation is so low-fi that I find it hard to get truly excited about this dark fantasy setting.

Today it looks dire. It’s not just that it’s technically shabby with meat-puppet character models that never convince in cutscenes – it’s that the colours are so brown and the art direction so uninspired that Ferelden is a hard world to be dazzled by. In 2014, Dragon Age: Inquisition’s rich colours and gigantic environments finally managed to make this backdrop seem awe-inspiring. Origins makes it feel like a series of green and brown boxes, separated by a world map.

Yet this is still considered the best Dragon Age by many players, and I see why when it’s taken as a traditional RPG. In combat you control one of four party members at once, and for those characters you’re not controlling, you can programme tactics for them which suits the strategy required for the situation. With a broad array of classes and plenty of abilities to unlock for each member, you have an immense amount of control over your party’s progression.

The combat is a lot trickier than it is in subsequent entries, too – hammering the A button only gets you so far, and on normal difficulty, area-of-effect spells can do damage to your own party. It’s a bit frantic to control on Xbox 360 – there’s the lingering sense that the constant pausing and manoeuvring of your party was primarily created for mouse control – but there’s a lot of satisfaction in using your characters’ abilities effectively. On that level, it’s certainly more considered than either Inquisition or Dragon Age 2, which lean a little too far into spammy set pieces.

I don’t think a great combat system and compelling levelling-up options alone make a great RPG, though, and the balance of combat to story is off in Origins. There’s just so much fighting in often tedious locations – the utter slog that is the underground dungeon of the Deep Roads, for example, or the long sequence in the demon-infested Circle of Magi tower. These are far worse stretches than anything in the subsequent Dragon Age games (except maybe some of the side quests in Inquisition), and life may just be too short to grind through them again if you’re considering a second playthrough on Xbox One.

The main story just isn’t that interesting, either, and it attracted a fair amount of criticism at release for being a generic fantasy joint. But it certainly has its moments – early on, the ritual that leads to your character becoming a Grey Warden results in two other candidates dying horrifically, suggesting that you’re not as unambiguously on the side of good as you’re initially led to believe. Likewise, Loghain, the only notable antagonist, has his reasons for being the way he is, and you have the opportunity to unravel them. The characters are better than the story they’re a part of, thanks to the quality of dialogue that brings them to life.

Like Mass Effect, Dragon Age is at its best when you’re interacting with your party, and while Origins doesn’t have a world-beating array of companions, it still has several of BioWare’s best. It helps that despite the amount of dry fantasy terminology in Dragon Age, the style of dialogue is realistic and modern – it’s a nice contrast to the overly familiar dark fantasy iconography that surrounds you. Your fellow Grey Warden, Alistair, is so cheerfully wry that it’s hard not to bring him on every quest, while the other obvious breakout character is the mysterious and cutting dark witch, Morrigan. It feels like the following two Dragon Age games used Morrigan and Alistair as templates for all your companions: big personalities, driven by different ideologies, who command followings among the series’ fans.

As a testament to how much your choices influences Dragon Age’s story, it’s possible to miss party members entirely and even send some to their deaths. By never going into the tavern in Lothering, a town later destroyed by Darkspawn, I never met the Orlesian songstress Leliana – another cult favourite among fans. On my current playthrough, I obviously corrected that. I also killed the mage Wynne in the Circle Tower without realising she could join my team. Not only do you lose their tactical value in battle, but you never get to hang out with them. Similarly to Mass Effect, having companions along for the journey, listening to the way they interact and affecting their approval of you through the game’s dialogue options is the real reason you play.

The bravery to allow you to wreck things for yourself is admirable. Moment-to-moment, you can behave like an utter bastard with genuinely interesting outcomes – clearly I did, by accidentally killing a possible party member. Without Mass Effect’s Paragon/Renegade morality system, you’re just left with the consequences of choices and the relationships you make. This makes it the better system because it encourages more chaotic decision making.

You can ultimately determine who rules Ferelden once Loghain is taken down, as well as who dies in the final battle against the archdemon. Those choices matter, even if the overarching narrative is otherwise hard to get invested in, because ultimately the threat is just a big dragon and some orcs. Some design hallmarks date Origins, too, like the fact you play a mostly mute protagonist, who only speaks to yell terrible, repeated one-liners in battle. The change to voiced heroes from Dragon Age 2 onwards was wise – the result here is that you’re playing a bit of a blank slate compared to the rest of your party, as strong as the writing is, and as much as they account for the origin you choose.

Origins did so much heavy lifting for building the world of Dragon Age that subsequent games have managed to find more interesting angles on its world. Yet they’re all imperfect. Dragon Age 2’s use of a single setting attracted some criticism and Inquisition’s side quest-heavy open-worlds felt very far from where the series began. Unlike Mass Effect and its second entry, I don’t think they’ve made a truly great Dragon Age game yet. BioWare keeps reinventing the mould, carrying across certain elements of the combat and remaining faithful to the fiction, but throwing a lot of stuff out. It’s an approach that may eventually lead to a world-beating RPG.

Origins is the purist’s choice. It’s an exhaustingly detailed RPG, with intricate combat and extensive ways to customise your party behind the scenes. If constant battling isn’t the main reason you like roleplaying games, though, it’s a very hard one to love. But there is merit in being so unashamedly traditional: there have never been a lot of classic-style adventures like this on Xbox, and this is still among the best of its kind.