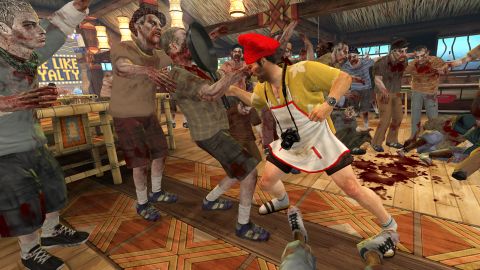 For most gamers, Dead Rising has always been a love it or hate it franchise. The first game gave players a volatile mix of creative zombie slaying with a very strict time table for objectives. Last year’s sequel softened the series up a little and added a ton of fun new ways to kill zombies, but still had its fair share of annoying foibles that made the game more hardcore or frustrating depending on your disposition. Now the devs behind Dead Rising 2 have updated the sequel, with new modes, new weapons, new challenges, and a familiar face in the lead. While it doesn’t leave behind all the problematic points of the original version, Dead Rising 2: Off the Record is the closest the franchise has come to fulfilling the potential of its premise.

Taking place in a different reality where Dead Rising lead Frank West was around for the events of Dead Rising 2 instead of sequel hero Chuck Greene, Off the Record closely follows 2’s plot. After a zombie outbreak decimates Las Vegas, it’s remade as casino/adult fun palace Fortune City which hosts the game show Terror is Reality where West is a contestant. The layout of Fortune City is unchanged from the first version, save for a new kiddie park that reminds us of Toy Story’s Galaxy Pizza. Soon enough a zombie outbreak occurs and evidence says a group of zombie rights protestors is responsible, though Frank, ever the journalist, smells a bigger conspiracy and is going to dig deeper, no matter how many crazy and/or undead people get in his way.

Much of Dead Rising 2 remains unchanged, just slightly reshuffled and playing out differently now that Frank’s there, like how Frank is the one needing once a day Zombrex injections to fight off the undead plague instead of Chuck's daughter. In the years since his first adventure, Frank’s become a more comedic character, with people constantly mocking him as fat, balding and washed up, not that West lets it bring him down. That same lightheartedness permeates the whole game, as most of the events are a little goofier now that the developers are doing them for the second time around. It’s not a full-on parody, but ratcheting up the sillier elements helps Off the Record since the series is at its strongest when not being serious.

Rising’s most off the wall when it comes to the huge collection of items you can kill zombies with, something 2 expanded on with the item crafting system, and Off the Record builds on that by adding new combinations. Simply using spray paint, fireworks, or stuffed animals against hundreds of zombies is fun enough, but adding machine gun wheel chairs, boomerang knifes, and gun that shoots dildos (seriously) makes for a great time. However, just as in the original version it can be a hassle using precious inventory space on the items to make the badass combo weapons, with some combos being more trouble than they’re worth since they break as fast as any other item. No matter how you kill the zombies, when you’re taking down swaths of them with improvised weapons is Off the Record at its finest, but you’ve got to work hard to earn those flashes of enjoyment.

DR2:OTR’s main game preserves Rising’s controversial time management system, as events and side quests happen at set time periods and if you miss them, they’re gone for good. Just like previous games, when you’d rather be killing loads of zombies or searching an area for secret stockpiles of cash or life-saving Zombrex, you’re instead running off to the nearest hostage or repetitive, drawn-out boss battle as time ticks away on the clock. This leads to incredibly frustrating moments like the one we experienced where we started a story event but ran out of time halfway through and had to revert to an hours-old save, planning our time better the second time around.

Fortunately time management is one of several things Off the Record at least improves upon while not outright fixing. Before you only had that one save slot you were forced to revert to whenever you died or missed a story mission, which DR2:OTR adjusts by introducing a checkpoint system that softens the blow of failure. Whenever you enter a new area (and the load times in OTR remain crappy), the game creates a checkpoint you revert to upon losing, normally replacing a few minutes of progress instead of a few hours. You don’t choose when the checkpoints are created, so they could still be in annoying spots where loading an older save would be preferable, but it’s a big step towards addressing one of Rising’s biggest flaws.

If you want to totally sidestep the clock-watching of the campaign, Off the Record also adds the new Sandbox mode, which almost makes the title what many gamers dreamed the series would be. In it you can run around and kill zombies for as long as you like, take on challenges whenever you want, and unlike the first game’s Infinity Mode, your health isn’t constantly decreasing. It’s a nice, low impact way to enjoy the game, and you can use it to level up Frank outside the campaign, decreasing the need to waste valuable time grinding in the main game.

Dead Rising 2: Off the Record is a great game for those out to revisit Dead Rising 2 and those who avoided the series until now. It fixes or at least improves on several major issues with the series, making Capcom’s zombie slayer more fun than ever. It may not be perfect and we’re intrigued to see how the developers build on these improvements in the inevitable Dead Rising 3, but for whatever it’s worth, Off the Record is the best Dead Rising game to date.