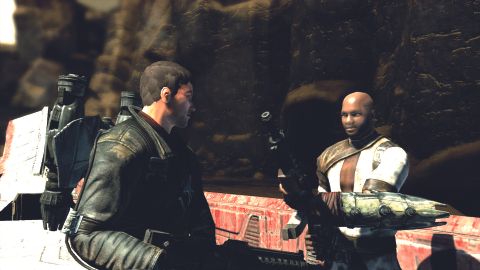 Groan, groan, groan to the high heavens. Is this truly all we have to look forward to for the next 10 billion years? Do we just have to watch some guy who looks pretty much the same in every single game trudging about scenery rendered in Unreal Tournament 3’s engine? Are developers deliberately failing to come up with anything new whatsoever to shape their games? And no, we don’t just mean “make the same game and then stick some bloody gimmick into it so people think it’s different from the last one.”

That’s exactly what’s happened here, yet again. Dark Void, a game that had the potential to be something special if it hadn’t been crushed underneath the hammer of unoriginality. Just because you’ve got a jet pack in the game doesn’t mean it’s going to hide the factwe might as well be playing Dark Sector, Damnation, or Terminator: Salvation or... well, you get the picture. It doesn’t help that said jet pack sections are very difficult to control effectively using the traditional mouse and keyboard setup. It’s better with a pad, but it’s still pretty weak and imprecise. We’ll concede that when it does work it feels pretty cool, but it’s so fiddly, you always feel that this facade could shatter in the blink of an eye.

The best thing about the game is the plot and setting. While the idea of “humans stranded in rebellious bondage seek saviour to break free of chains” isn’t an original one, the whole tie-in with the Bermuda Triangle is interesting. You feel more could have been made of this – why didn’t they really play on this aspect and have more than just a cameo from a scientist based on Nikola Tesla? There’s all sorts of missing celebrities they could have had, but enough of that. We could go on for a long time about it. So yeah, the setting is good and you just wish the game could back it up, as is usually the case with these over-the-shoulder titles we’ve been seeing so much of.

There’s a cover system, which is of little surprise to anyone, and there’s also a ‘vertical cover system’, which just involves flipping the viewpoint to face up a surface, and your character performing prescribed moves by pressing the C key. It can serve up some pleasant visual moments, but other than that it’s just an unnecessary gimmick.

Speaking of visuals, they are bland and washed-out, especially with the ever-present distance fog blighting the land. To add to the uninspiring visuals, the crux of the game – shooting Geth-like creatures with big slugs controlling them – is vapid and tedious too. Every enemy seems to take about 40 bullets to the face before they go down in time-honoured “stretch-the-gameplay-out-artificially” tradition until you upgrade your weapons using the obligatory upgrade system that every game has to have now. You don’t actually get to make many upgrades, as the points you collect to enable them take ages to accumulate.

There must be something good about this game, though. There has to be. As we mentioned, there’s the “when it works” air combat. Once you get used to it, it can feel fluid and exciting, but the line between success and failure is much too fine. If you’re using the mouse and keys, the temptation is always to use the WASD keys to move around – but when flying, you need to use the mouse, which is criminally sluggish and imprecise – the very opposite to what it should be. So, definitely use a gamepad, as it’s clear the mouse support was added as a very last-minute afterthought. If you can use one, or if you can force yourself not to press A or D to strafe left and right, then it’ll be good fun soaring around in the clouds. Just don’t expect to be too accurate with your gunfire and you’ll be fine.

Dark Void is a criminal waste of time and energy, as standard and generic a game as you could hope to find, with a couple of little things that raise it out of the meat grinder and back into the land of the living. The flying side of things is reasonable but not worth all the hype, as the main game is a total bore and the plot is wasted on the rest of the package. That about sums it up.