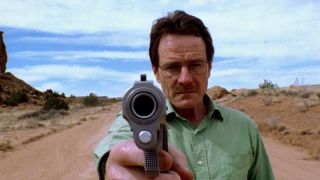 It’s time for a trip down memory lane, bitch. With the Breaking Bad movie, El Camino, adding one final chapter to the story of Jesse Pinkman, it’s about time to recap everything that happened during the course of one of the 21st Century’s greatest TV shows. Everything from the cooks, the crooks, and even a run-down of every major character who died in Breaking Bad is here.

So, whether you’re short on time and don’t want to binge all five seasons before dipping into El Camino or just need a nudge on what Jesse Pinkman (and company) suffered through at the hands of Walter White, join us for our abridged Breaking Bad recap.

The season begins with Walt and Jesse selling their first batch of meth to a pair of drug dealers. When the transaction goes south, Walt poisons them, though one – Krazy-8 – survives and is held captive. Jesse disposes of the dead dealer by dissolving his body in hydrofluoric acid, while Walt strangles Krazy-8 after he attacks him with a shard of glass.

Things eventually escalate as Walt’s talents draw the attention of both his brother-in-law, Hank – a DEA agent working in Albuquerque – as well as homicidal drug kingpin, Tuco. While Hank’s investigations eventually lead to a dead end, Tuco attacks Jesse and steals a large quantity of crystal meth. Walt retaliates by blowing up Tuco’s hideout, leading to Tuco cutting a deal with Walt and Jesse. The season ends with the two parties in league together, though Walt and Jesse are decidedly more hesitant after a drugged-up Tuco brutally attacks and kills his own muscle for a minor slip of the tongue.

Who died in Breaking Bad season 1?

Season 2 begins with a manic Tuco killing his associates, kidnapping Walt and Jesse, and taking them to a shack in the desert where his uncle, Hector Salamanca, resides. Salamance, though, can only communicate via a bell on his wheelchair after suffering a stroke.

Walt and Jesse concoct a plan to escape but, as they do so, Hector alerts Tuco. However, he is stopped from killing the pair after Hank arrives at the scene – killing Tuco during a shootout.

Post-Tuco, Walt explains his absence (having not been seen by Hank out in the desert) as being in a fugue-like state thanks to his chemotherapy. Jesse, meanwhile, draws the ire of his parents due to his erratic behaviour and drug use and is kicked out. Jesse eventually rents a place owned by Jane, a landlady who eventually begins a relationship with Jesse and gets him hooked on heroin.

Walt and Jesse are introduced to Saul Goodman, a shady lawyer who helps legitimise the business of producing their now trademark crystal blue meth. He puts the pair in touch with Gus Fring, a distributor who orders a large batch of meth.

The demands of the cook mean Walt misses the birth of his daughter – and also drives a wedge between him and drug-addled Jesse. When Walt holds back Jesse's share of the money, Jane threatens the former teacher by saying she will reveal the truth to his family if the money's not handed over. Things take a dark turn as Jane later overdoses, with Walt standing over and refusing to help.

The season concludes with Saul drafting in ‘cleaner’ Mike to help deal with the fallout from Jane’s death, while her grief-stricken father – an air traffic controller – accidentally causes a plane crash over Albuquerque: a moment that was foreshadowed in the opening of every season 2 episode.

Who died in Breaking Bad season 2?

After their marriage dissolves, Walt tells Skyler about his meth-cooking business – all while his alter-ego, Heisenberg, becomes the target of two twin assassins from the Salamanca family.

Walt’s personal live degenerates further after Skyler admits she slept with her boss, Ted. Walt then spirals out of control, stopping his meth production, while Jesse strikes out on his own. Walt, though, eventually does a U-Turn and begins cooking meth, flanked by Gus’ hand-picked assistant, Gale.

Walt and Jesse almost end up caught by Hank, but Saul saves the day by calling through to Hank and telling him his wife, Marie, is in an accident. After finding out that wasn’t the case, Hank attacks Jesse, who he knew was in the RV at the time of the call.

Hank is later shot and seriously injured by the Salamanca twins, but he manages to kill one despite being seriously wounded. Mike kills the other one in hospital.

Jesse is invited back into the fold with Gus at a new superlab, though he steals a fraction of the finished product to help his friends sell meth at a drug recovery meeting. While there, Jesse befriends and starts a relationship with Andrea, but is angered when he discovers Andrea’s brother is being used to peddle his blue meth by a pair of Gus’ drug dealers.

After Andrea’s son is murdered by the drug dealers, Jesse sets out to kill them. Walt gets there first and orders Jesse to run. Gus then kidnaps Walt and firmly warns him that his patience is wearing thin; he then informs “Heisenberg” that he should replace Jesse with Gale. Paranoid that Gale will replace him (and that he will likely be killed in the process), Walt contacts Jesse, who shoots and kills Gale.

Who died in Breaking Bad season 3?

The aftermath of Gale’s murder sees Gus kill one of his workers in front of Walt, all to send a message. Jesse is hit hard by his own actions: he spends the opening episodes in a drug-fuelled frenzy. Hank also continues his recovery at home by keeping on the trail of the mysterious Heisenberg.

After yet again overcoming his addiction, Jesse is tasked with killing Gus via ricin-tipped cigarette, but can’t go through with it.

The latter half of the season deals with Gus’ conflict with the Mexican cartel. Jesse is drafted in to help take over the meth production ahead of Walt. Gus poisons his main rival, Don Eladio, and takes over his business.

Back from Mexico, Gus fires Walt and also tells him that Hank will be killed if his investigation proceeds. Backed into a corner – and losing money – Walt decides to kill Gus, but only after coercing Jesse into helping out. Walt does so by poisoning Andrea’s son and telling Jesse it was Gus.

Gus visits Hector Salamanca to gloat over his recent triumphs in Mexico, but it is there where Gus is killed: Walt has rigged a bomb to Hector’s wheelchair. Both Hector and Gus die – and Walt tells Skyer that he “won.”

Who died in Breaking Bad season 4?

The final season (which is split into two parts), focuses on Walt and Jesse’s new business relationship with Lydia, an executive from the Madrigal corporation that had ties to Gus Fring’s empire. Joined by new hire, Todd, they rob a freight train to gain a large supply of methylamine. The caper turns tragic when Todd kills the sole witness, a young child.

Mike is being pressured by the DEA into giving up the names of those who are aware of Walt’s dealings. This leads to Walt killing Mike. However, Lydia already knows the names of those involved and enlists the help of Todd’s uncle Jack, an Aryan gang leader, who swiftly dispatches those with ties to Madrigal and Walt. The first half of the season ends with Hank accidentally discovering that Walt is Heisenberg thanks to Gale’s leftover journal, which includes the initials "WW".

Walt’s cancer returns amid Hank uncovering the truth. He tells the DEA agent to “tread lightly” but Hank instead starts a new investigation. Walt responds by attempting to frame Hank as Heisenberg.

Jesse eventually joins Hank’s cause after finding out Walt was the one who poisoned Brock. Walt then makes one final play: he gets Jack to kill Jesse. In a showdown in the desert, Hank corners Walt but Jack and his gang "save" the day by murdering both Hank and his partner Gomez. Walt tells Jesse he watched Jane die and the gang keep Jesse as prisoner/meth cook.

Walt goes into hiding but returns to make sure all of his money ends up with his family. He ties up another loose end by poisoning Lydia. He then saves Jesse from the Aryan gang, and, using a remote-controlled machine gun, Jesse kills Todd and Walt kills Jack. Walt is also hit by a stray bullet.

Jesse leaves without killing Walt and speeds off in a Camino, crying. The series ends with a wounded Walt collapsing and seemingly dying while sirens blare in the distance.

Who died in Breaking Bad season 5?