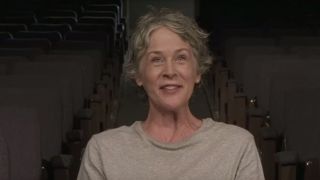 Since the season 6 cliffhanger we've heard assurances from most of The Walking Dead's cast, letting us know in no uncertain terms that season 7 will be worth the wait. Now it's Carol's turn.

As one of a few cast members seemingly safe from Negan's bat (although who knows, right?) actress Melissa McBride is still nevertheless approached by fans of the series, whose disgruntled cries she's heard a lot over the last several months. "Oh, I’ve heard it," she tells EW. "I’ve heard it all. But, you know, it’s entertaining. It’s compelling and some people like cliffhangers, some people hate them, and that’s just part of the experience."

It's true the "who's gonna get beaten to a bloody pulp?" cliffhanger is one of the show's more divisive choices, but ultimately? Everyone's gonna be glued to their TV sets the night of the season 7 premiere. "I hope those people that feel jilted will tune in because the premiere is just going to be… oh God, it’s going to rock the walls," McBride continues. "The wait is worth it. Whether you’re angry with it or whether you liked the cliffhanger or whether you’re pissed off about it, the wait is worth it."