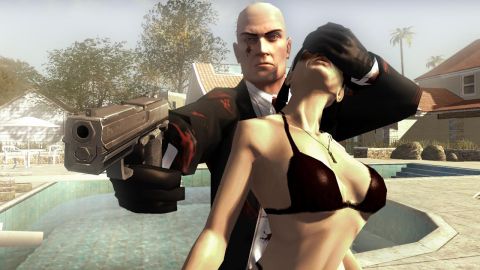 Surprisingly conflicting, this newest episode in the Hitman series succeeds in the face of what would ordinarily be terminal flaws.

Creeping quietly down the hall, the harsh fluorescent lighting gleams off your bald head. Your target walks a few paces ahead, unknowingly striding into certain doom. As you round the corner, you carefully unwind the fiber wire and prepare to throttle your quarry to death. You raise the deadly garrote, but before you can strike, you accidentally bump the back of your target's knee with your own, alerting him to your presence. He turns around and lets out a scream that alerts everyone within a 10-yard radius (regardless as to whether they're rooms away). Being a hitman is a tough proposition in Hitman: Blood Money.

Another 15 minutes of painstakingly planned contract killing flushed down the toilet due to wonky, inaccurate controls. Now you will have to murder an alarming number of people in order to get back on track - remember, you can't leave any witnesses, so anyone that's seen you must be treated to a dirt nap. Frustrating, but somehow Blood Money manages to transmute defects into challenge. Of course, you still have to watch your notoriety, because each botched kill could result in disadvantages later on.

Over the course of your career of professional execution, you'll encounter every single content descriptor listed on this game's ESRB rating. Blood, intense violence and sexual themes all blend together with developer Io Interactive's trademark perverse sense of humor to produce a rewarding, but profoundly mature, experience. Despite the control issues that plague this game, the bloody wake of bodies you leaves behind provide hours of guilty pleasure.

Hitman: Blood Money hits a number of stumbling blocks like wooden character animation, an inability to swap weapons while hiding in a closet and inexplicably alerted enemies (they can't ALL have those little earpieces, can they?). Still, it manages to provide an incredibly compelling experience by consistently setting an intense mood, forgiving player errors and providing numerous options for accomplishing your fiendish goals. Blood Money ramps up its difficulty at a pace that truly promotes learning the methodology required for a clean kill, and that's probably what ultimately will keep you replaying missions in an attempt to score that perfect hit and earn a Silent Assassin ranking. Surprisingly conflicting, this newest episode in the Hitman series succeeds in the face of what would ordinarily be terminal flaws.

Surprisingly conflicting, this newest episode in the Hitman series succeeds in the face of what would ordinarily be terminal flaws.