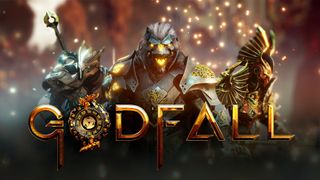 Given that Godfall is one of the first games to be announced for the next generation of PlayStation consoles, we thought it’d be a good idea to pin down everything we know about the title so far, this new ARPG coming to the PS5 and PC later this year.

Developed by Counterplay Games, Godfall offers a fantasy setting and a soulslike combat system that can be experienced both single-player and co-op. In this article, we’re going to run through everything we know so far about Godfall, from the release date to the story and the gameplay details we’ve picked up on so far.

Godfall release date - When is it coming out?

First announced during The Game Awards in 2019, Godfall is being developed by Counterplay Games and will be published by Gearbox. Counterplay is yet to reveal when the game will launch, but there has been a general release window provided - Holiday 2020. This means that the game will likely launch in the later months of the year. Between September and December of this year would be a solid rough estimate - and definitely in line with the PS5's own 'Holiday 2020' release date.

Previously, Counterplay worked on Duelyst – a digital CCG that was published by Bandai Namco and tried to draft tabletop strategy and depth into the card game fold. It’s a visually striking game with a strong following.

Take a look at some leaked Godfall gameplay footage

Initially, a six-second loop of gameplay made it onto Twitter and Reddit, but this leak quickly gave way to something more in January, when an internal trailer from Counterplay started circling online. The short clip is from early 2019 and presents content that is not yet final, but importantly it gave us an extended look at how the game looks and plays. The environments shown depict ancient ruins, enchanted forests and mountains in the sky. It looks like as well as sword-swinging you’ll be able to imbue attacks with elements like fire and electricity. Enemies also appear to drop particles that can be picked up by the player (perhaps a soul retrieval system?) and will flash red before a dangerous attack, a signposting tactic seen in other soulslike games.

Godfall story – What is it all about?

In an interview with PlayStation Lifestyle, Godfall creative director Keith Lee spoke about the inspirations behind the world of Godfall and how the story fits together. The game was inspired by novel series like The Stormlight Archive and Isaac Asimov’s Foundation franchise. Dwelling further on the story, Lee revealed a basic premise for Godfall in the same interview “The world is split up into the realms of Earth, Water, Air, Fire and Spirit,” explains Lee. “You’ll play as one of the last remnants of an exalted Knight’s Order intent on stopping the apocalypse and preserving the last vestiges of their world.”

In our own interview for GamesRadar’s Big in 20 series, Lee dwelled further on the setting of the game. “It’s a co-op looter-slasher experience set in a more serious and brand-new fantasy world filled with heroic knights and ancient magic.”

Apparently armor sets will play a significant part in the game, special suits known as “Valorplates” will be scattered throughout the disparate worlds, offering armor that can be found and equipped. They can be augmented with mods and will imbue the player with certain abilities or cast offensive spells.

Godfall gameplay details – What do we know so far?

Described as a “looter-slasher” on the official website, Godfall seeks to meld the gameplay of games like Dark Souls and God of War with the progression systems and loot mechanics of games like Borderlands and The Division. Combat is achieved via third-person melee battles and you can play with up to three other heroes in co-op - taking on gigantic armoured beasts is always easier with as many swords as possible.

It looks like you’ll be able to parry and riposte in battle according to the clips we’ve seen so far, with scripted enemy animations that can catch you off guard (a lot like Sekiro!) Combat scenarios will range from games of cat-and-mouse with particularly dangerous enemies to group encounters and more stoic boss fights.

In the aforementioned interview with PlayStation Lifestyle, Keith Lee talked about the existence of limited ranged attacks and the fact that players will have two melee weapons to swap between in battle. Classes are supposedly flexible too, meaning you can craft a versatile character out of the playable protagonists. It was also revealed that the game was inspired by Monster Hunter World, so expect similarly haptic combat.

Godfall cross-gen – Will it launch for PS4 and PS5?

Given that the game is dropping in quarter four of 2020 right around the release of next-generation consoles, you might expect the game to be cross-generation and available to play on PS4. Unfortunately, this isn’t the case and Godfall will be exclusive to the PS5 upon launch, with a separate PC release on the Epic Games Store. The exclusivity policy could be timed, in which case the game might land on Xbox Series X in the future, but as of right now, it will only be available on PC and the PS5 on launch.

Developing for the PS5 clearly has its benefits, and Lee made note of them in the interview mentioned above. Lee talked about how the SSD (solid-state drive) in the PS5 enables better detail, “seamless” loading and improved haptics. According to Lee, the adaptive triggers in the PS5 controllers add a lot to the combat in Godfall, which he described as “kinaesthetic in nature”. Supposedly attacks will feel better in the hands when you’re going toe to toe with the game’s fantasy beasts.

We’ll certainly learn more about Godfall as we move through the rest of the year, most likely when the PS5 is officially revealed, as this game is looking like an important part of Sony’s next-gen console lineup.

For more on why you should be excited about next-gen consoles, check out this little lot: