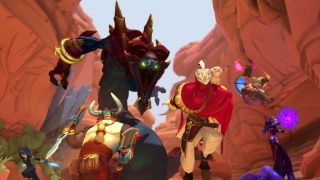 Gigantic, a third-person competitive team game featuring beautiful art, colorful characters, and giant monsters, is back on track after financial setbacks put development on hold earlier this year. Development studio Motiga has partnered with Neverwinter publisher Perfect World, and the duo have released a new trailer to re-introduce the Xbox One and Windows 10 game to the world.

I always enjoyed my time with Gigantic, so I'm happy to hear the news. If you're not familiar, Gigantic takes familiar concepts from MOBAs (like League of Legends) and character-based team competition games (like Team Fortress 2) and tweaks them.

You and your allies start by each picking a character, then duking it out against another team by using your special abilities and fighting your way to their base. Only in Gigantic, the "bases" are giant monsters that have dramatic clashes, and they'll squash you flat if you rush in too early.

Gigantic was previously slated for a full release by the end of 2016. We'll see if Perfect World can still make that happen.