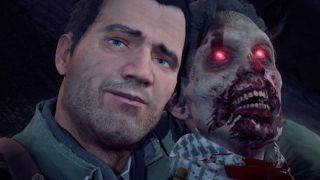 The Dead Rising series has always been the class clown in a schoolroom full of zombies. Where other games throw the undead at you and expect deadly serious carnage and/or stomach-turning violence, Dead Rising makes the act of zombie slaughter a wacky, campy joy. And nowhere has that been more evident than a new behind-the-scenes trailer for Dead Rising 4, where our hero Frank West decimates a shuffling horde with a tornado made from a slushie machine.

Other than the tastiest whirlwind of death possibly ever created, this video lays out three key components of Dead Rising 4: A return to the series' roots thanks to the casting of Frank West and the setting of Willamette, new weapons and combos to play around with, and the addition of new types of zombies to mix up the combat. Throw in a tribute to gaming's best chainsaw-juggling clown and I'm in.

Oh, and if you're feeling more nostalgic, don't forget you're also in for a treat when Dead Rising, Dead Rising 2, and Dead Rising 2: Off The Record get remastered for current-gen consoles.