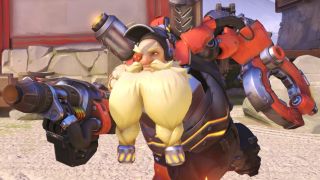 If you opted for the PS4 or Xbox One version of Overwatch, I hope you're not a Torbjorn player. The diminutive Defense hero is getting a big nerf sometime next month, according to game director Jeff Kaplan.

"In an upcoming patch, we will reduce the damage done by Torbjorn's turret by 30 percent on Xbox One and PS4. PC will remain unchanged," Kaplan wrote on Reddit, explaining that the ETA will depend on how fast Microsoft and Sony certify the patch.

Kaplan isn't elaborating on why this is only targeted at console players, but Redditors have their own theory. Since the turret automatically acquires a target with perfect accuracy, it's outclassing players who use a controller to aim. PC players, with hyper-sensitive mice and more accurate shooting, are allegedly better equipped to deal with a problematic turret. Again, that's the popular theory. Whether or not it's accurate isn't known for sure.

Blizzard's team-based FPS is full of colorful characters; 21 of them, in fact. With such a wide selection, it's natural that one could rise to the top as the most formidable/annoying foe to face. On console, that honor goes to the beard-braiding mechanic with auto-aiming turrets. Sorry Brobjorn.