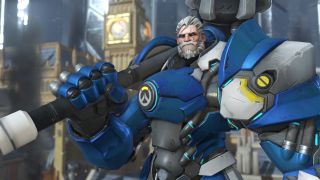 If you play Overwatch long enough, you start to notice certain constants. Lucio players will almost always put themselves in grave danger just for a chance at boop-ing you off a cliff, for instance, or two Reinhardts who lock eyes must immediately engage in an honorable joust. This comic from Finnish artist Marko Raassina celebrates that knightly ritual. Click to see the full frames.

Y'know, I thought I exercised remarkable restraint when it came to Rein fights in Overwatch… but now that I think of it, if there's another Reinhardt in the match, I do end up in a hammer duel with him at least 85 percent of the time. Some things just have to be done, who am I to question the old ways?

Want to get a primer on how to play the latest Overwatch event? Read our Overwatch Uprising tips and do your best not to go charging in on your own.