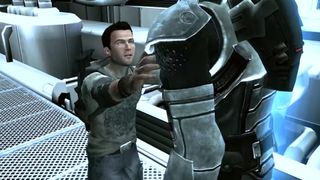 Shadow Complex Remastered will hit PS4 on May 3, Epic Games and Chair Entertainment announced today. The original Shadow Complex first came out in 2009, but this will be the first time the Metroid-inspired sidescrolling action game is playable on a Sony platform.

On top of the visual refinements you'd expect from a game with "Remastered" in the title, the new version also adds "dynamic melee takedowns" for more cinematic close-up combat and a full set of Trophies. Once you finish the campaign you can try out the Master Challenges, and take part in a rotating selection of weekly challenges.

Shadow Complex Remastered will also head to Steam and the Windows 10 Store on May 3, though PC players had the opportunity to pick the game up for free via Epic's digital distribution platform back in December.