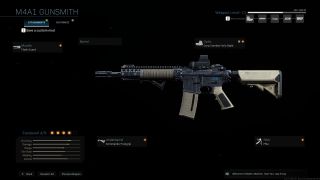 Call of Duty has a long history of letting players trick out their multiplayer weapons, stretching all the way back to the original Modern Warfare. For this reimagining of their classic title, Infinity Ward has thought long and hard about how to increase the series’ tinkering potential. The result of this is Gunsmithing, the deepest and most varied weapon customisation system the system has ever seen.

Rather than acting as a sub-menu in multiplayer matches, Modern Warfare’s gunsmithing is an entirely separate system in its own right. Every firearm in the game can be adapted and modified in multiple ways, letting you tailor each weapon to perfectly suit your preferred playstyle.

Select your weapon of choice in gunsmithing, and Modern Warfare will bring up a detailed model of the weapon in question. Each firearm in Modern Warfare can be modified in up to five different places, at the muzzle, the barrel, the underbarrel, the optics, and the rear stock. Each weapon is different, however. Assault rifles generally have more customisation options than pistols, for example.

Each of these points has multiple attachments available for you to choose from. Under the barrel of an Assault rifle, you could attach a laser sight, a foregrip, or a grenade launcher. Muzzles meanwhile can be modified with silencers, flash-hiders, recoil compensators and so forth. Yet what separates this customisation from previous Call of Duty games is that each attachment offers unique benefits and drawbacks. These must be considered when modifying your gun to reflect your personal approach to multiplayer.

For example, when it comes to optics, you can stick a sniper scope on your assault rifle if you want, yet while that will give you maximum zoom, it will drastically reduce the speed at which you can aim down the sight, and increase the amount of scope sway you encounter without holding your breath. By the same token, attaching a 5megawatt laser sight will drastically increase your hip-fire accuracy over a 1megawatt laser sight. But the latter also lights you up like a Christmas tree, making you highly visible on the battlefield.

In this way, gunsmithing requires you to think about how best to customise your weapons to suit your playstyle. Aggressive players who like to move fast and shoot from the hip will benefit from having a powerful laser sight, short barrels and no stock, whereas tactical close-quarters players will want good short-range optics and foregrips to improve their accuracy and movement speed while aiming, as well as a compensator to reduce recoil.  Snipers will have to choose between silencers and flash hiders to minimise their profile.

Alongside these various hardware attachments, each weapon can also be upgraded with a weapon “perk”, which offer a wide range of potential skill modifiers. Some perks change the type of bullets your weapon fires, such as adding Full Metal Jacket rounds for greater armour penetration, or “Wounding” frangible rounds that slow down an opponent’s healing capability. Other perks provide more specific modifiers that cater to different play-styles. Close-quarters players might benefit from adding the “Fast Melee” perk, giving then an edge in hand-to-hand combat, while snipers will undoubtedly want the “Presence of Mind” perk, that lets them hold their breath infinitely for a consistently steady shot.

Gunsmithing isn’t all about practicality, however. The system also accounts for the all-important aesthetics of your chosen firearm. Each weapon has multiple unlockable skins that can be further tailored with stickers, alongside collectible lucky charms that dangle from the side of your weapon. You can even change the reticule of your ACOG or holographic sight. When you’re finished, you can admire your handy-work in Gunsmithing’s “preview” mode, giving you an interactive 360-degree view of your customised weapon. Maybe don’t look down the barrel, however. Gun safety, and all that.