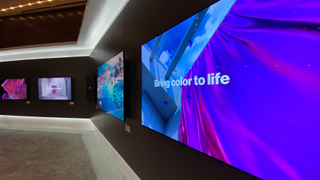 We got up close and personal with VIZIO at CES 2020 where it announced its first ever OLED TV alongside a range of enhancements to the rest of the TV lineup and some crazy cool gaming stuff (alongside the next generation of its SmartCast operating system and an overhauled audio lineup you can see here).

Spend even just a few minutes with any of VIZIO's new products and you'll come away thinking "I want this."