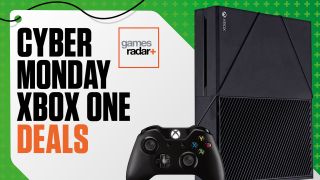 Black Friday and the whole sales season are on their way out, but Xbox One X Cyber Week deals are still live and waiting for you. From Xbox One X and S bundles, to games and accessories, there are loads of offers that rank right up there with the best Cyber Monday game deals currently available. So, if you're still on the hunt for a cheap Xbox One console deal then now's the time look at our pick of the best discounts and bargains from around the web. If you’re looking to take your first step into 4K console gaming, there’s plenty to choose from as deals on the premium console in the form of the Xbox One X Cyber Week deals are pretty good already and will offer the most bang for buck.

Xbox One X 1TB Star Wars Jedi: Fallen Order bundle | $422 at Amazon (save $78)
Get $150 off the world's most powerful console and get the cracking brand-new Star Wars game thrown in too.

For those who want a more budget-friendly option, there’s always the Xbox One S. There have been some incredible bundles so far, complete with some of the most addictive games on the system. It all adds up to hundreds of hours of gameplay on a super-cheap console. Below, we’ve rounded up the ones that will save you the most money, as well as giving you a chance to browse all of the games currently on sale this Cyber Week. There’s never been a better time to bulk out your collection, and there’s savings on everything from 2019’s latest and greatest to some bonafide classics that no Xbox owner can do without.

But that’s not all we’re offering this Cyber Week. Be sure to check out all the Cyber Week TV deals that are currently doing the rounds, they’ll complement the Xbox One X Cyber Week deals perfectly. Pick up a television that suits you and, crucially, will make your new HDR-ready console look even better. Don’t forget to bookmark this page and keep checking back throughout. The Xbox One X Cyber Week deals will come thick and fast. Some might sell out, too, so be sure to lock down a deal as soon as you see it. You never know when you might see it at that price again.

Best game deals across the web

Xbox One S two-controller bundle | $253 at Amazon (was $299.99)
Like local multiplayer? This bundle gets you all set to play with a buddy with two bundled-in controllers and a built-in disc drive, an entirely sensible bargain.View Deal

The Xbox One X will play your games in 4K at lightning-fast speed, so this is the console to get if your budget can stretch to it - it's powered by superior technology for faster and prettier games. It's also the only Xbox capable of displaying games in 4K Ultra-HD. For context, that's roughly four times as detailed as standard 1080p HD.

There are currently a few deals on the mega-console. You'll save some money, but not nearly as much as you will if you wait until November. Have we made it clear that Cyber Week deals are going to save you the most? Okay, good. Here are some bundles we've hand-picked for you.

The Xbox One S is Microsoft's entry-level console, and it's an affordable way to get into current-gen gaming. No, it can't play games in 4K and doesn't have the processing power of the Xbox One X. However, it is a cheaper buy and a great starter for those looking to get into the world of Xbox. Check out these amazing Cyber Week 2019 deals below.

Cyber Week is always a chance to grab a few must-have accessories for much less than normal. That stretches to gaming headsets, controllers, hard drives, and more. We've gathered the best of them here, and this list is regularly updated.

Xbox One wireless controller | $39 at Amazon (was $59.99)
Get one of the best game controllers for 33% less. It's also compatible with Xbox One, PC, and future Xbox consoles.View Deal

3-month Ultimate Xbox Game Pass membership | $37.79 at Walmart (save $7)
Xbox Game Pass is a tremendously strong proposition with over 100 games to play. That includes Gears 5, The Outer Worlds, Rage 2, and more. Get three months for less at Walmart.View Deal

Even though most of Cyber Week's bargains involve hardware, TVs, or peripherals, it's worth bearing in mind that you can get some fantastic game deals if you keep an eye out. We've got you started with the best offers available right now.

Borderlands 3 | $34.99 on Amazon (save $25)
The first looter-shooter has returned with all the style and madness you'd expect, and you can now grab a copy for over 50% less than you'd normally pay.View Deal

Wolfenstein: Youngblood (Deluxe Edition) | $24.65 on Amazon (save $15)
Things aren't going well in the world of Wolfenstein; Nazis won the war and giant robots stomp around the streets of Paris. Luckily, you're there to put things right.View Deal

Gears 5 | $36.99 at Amazon (save $23)
The latest Gears of War game puts you in the shoes of Gear 4 hero Kait as she embarks on a journey to uncover her past. What's her connection to the Locust Queen?View Deal