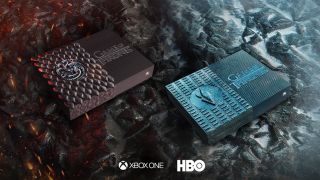 What do we say to the god of death? We ask him for custom consoles, apparently. In honor of Game of Thrones Season 8, Microsoft is channelling smooth-talking puppet master Littlefinger with a competition to win two custom, All-Digital Xbox One S consoles. They may be the best Xbox One bundles we’ve ever seen, frankly. The first is scaled and stamped with the Targaryen crest while the second features an icy Night King theme. Both are one-of-a-kind, so it’s quite the prize. No trial by combat is required to win, though - simply like their post on Facebook for a shot at the Night King model or retweet the reveal on Twitter with the #GamerThrones and #Sweepstakes hashtags to get a chance at the Targaryen system. You’ll need all the luck you can get, though. Only two people will walk away with these prizes.

Because they’re a spin on the digital-only Xbox One S that’s just been launched, neither system carries a disc-drive. However, they do come with three games to get you started: Minecraft, Sea of Thieves, and Forza Horizon 3. What’s more, they look as big-budget as the show that inspired them (which you can catch up with now via our guide on how to watch Game of Thrones Season 8 Episode 4, by the way). Half of the Targaryen console is layered with 3D leather scales that sit below a metallic house crest. This gives the impression of a, er, skinned dragon (now we know what Danerys does with her dead dragons, I guess - waste not, want not?). At the other end of the scale, the Night King model features blue “weathered tin metal” to represent the armor he wears. Insert your own ‘cool’ joke here.

If you’d prefer a fancy PlayStation instead, make sure you check out the rarest and most expensive limited edition PS4 consoles.