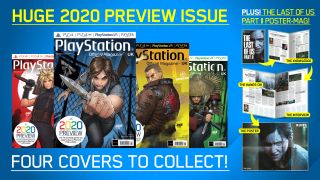 The hottest games of 2020 are previewed in Official PlayStation Magazine #170 as the team play The Last Of Us Part 2, Final Fantasy VII Remake, Marvel's Avengers, and more. It's on sale now, and it's unmissable!

Final Fantasy VII Remake's battle director Teruki Endo explains how the team created the new game's fights: “In order to create battles that are surprising and never boring, we worked hard to create a variety of strategic elements for each boss and enemy. Also, in constructing battle systems for each character, we wanted to respect the image of the original version while additionally introducing many new abilities.”

Our hands-on reveals a game that has the feel of Square Enix's other new series' combat systems, such as Kingdom Hearts III, but refined and far more tactical.

• Save up to 58% when you subscribe to Official PlayStation Magazine.

To celebrate the biggest games of 2020 we commissioned artist David Nakayama to create four collectible covers for Official PlayStation Magazine #170. While subscribers get a special version of The Last Of Us Part 2's Ellie, retail covers feature Final Fantasy VII Remake, Ghost Of Tsushima, Cyberpunk 2077, and a standard version of David's take on The Last Of Us Part II. Which will you get?