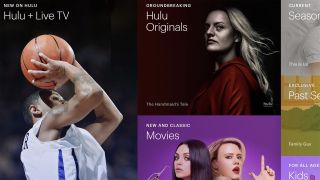 This no-brainer Black Friday deal is still live on Cyber Monday, with streaming service Hulu allowing you to sign up for $1.99 a month () as part of a $24 yearly subscription. Hulu lets you watch shows including Brooklyn Nine-Nine, The Handmaid's Tale, Castle Rock and Parks and Recreation, and allows you to bolt-on extras including ad-free viewing, plus premium channels such as HBO (worth it for 2019's best TV show Succession alone), Showtime and Starz. There is a potential snag if you signed up for Hulu's big Cyber Monday offer last year, but we think we've found a workaround - which we'll explain below.

Hulu monthly subscription now only $1.99 It's not quite free… but for the price of a takeaway coffee (or 1/3 of a coffee in New York), you can watch some of the greatest TV of all time whenever you want, and bundle up your Disney Plus and ESPN+ subscriptions.View Deal

Now, here's the thing. This Hulu deal is so good, you might not be allowed to take it if you signed up for Hulu's even-more-preposterous Cyber Monday deal last year (for $1 a month). Our sister site TechRadar was able to get this Black Friday deal by signing up via Facebook (despite taking the Cyber Monday deal), so either you can dupe the system, or it isn't really an issue. Don't forget: Hulu is owned by Disney and you can link it up with an existing Disney Plus subscription as part of a bundle. Check our guide to Disney Plus Sign Ups if you haven't already subscribed to the new streaming service with headline shows such as Star Wars spin-off The Mandalorian.