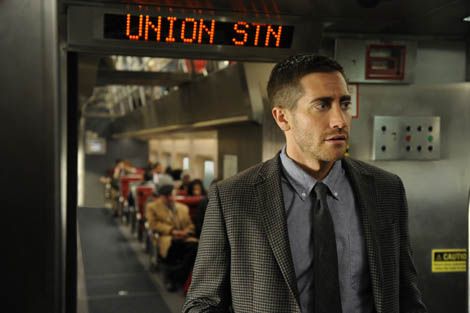 Christopher Nolan’s gift for combining brainscrambling narratives with pulse-racing action and jaw-crashing visuals has rightly crowned him the king of high-concept think-busters.

Yet if Source Code is anything to go by, the Dark Knight dude could face a challenge for that prestigious title (we just invented).

His competition? One Duncan Jones, whose gripping follow-up to lunar puzzler Moon mirrors the seismic jump Nolan made between his monochrome 1998 indie Following and 2000’s brilliant Memento and should likewise propel Jones into the Hollywood big-leagues.

If nothing else, it should speedily free him from the ‘son of David Bowie’ tag that dogged him when Moon surfaced two years ago, even if its hero – Colter Stevens, a US helicopter pilot in Afghanistan mysteriously separated from the rest of his unit – does bear uncanny similarities with a certain Major Tom.

If you’ve seen the trailer you know the pitch: on a commuter train headed for downtown Chicago, Jake Gyllenhaal wakes up to find himself opposite Michelle Monaghan with no clue who she is or how he got there. Running to the can, he stares into the reflection of a total stranger. Then the train goes ka-blooey.

It’s one hell of an opening: unsettling, disorientating and, thanks to Chris Bacon’s intense, Bernard Herrmann-esque score, shamelessly Hitchcockian. Eight minutes in and Jones has us by the throat.

Cut to a dimly-lit capsule where Stevens sits, alone, shackled and completely befuddled. A disembodied voice gives him the skinny: he’s a soldier, psychically connected to one of the outrage’s many victims, looking through his eyes during his last seconds on earth.

What did he see? What did he hear? Nothing? Well, back you go... And again, and again, until he finds the mass murderer thought to be on his way into the city with a dirty nuke primed for detonation. Ladies and gents, welcome to… Groundhog Bomb.

“This is not time travel,” explains boffin Jeffrey Wright. “This is time re-assignment!” Which means that nothing Jake does – locating the explosive, disembarking the train, foiling the nutter – will stop everyone perishing in a spectacular fireball in the timeline he must eventually return to.

But if he identifies the baddie, he can prevent greater loss of life, even as his own becomes increasingly threatened in the seemingly inescapable capsule. Or he could be dead already. In which case, what does he care if the Windy City goes up in smoke?

You don’t need to have second sight to spot where Source Code got its formulae. Alternative realities? The Matrix. Hi-tech time-hopping? Deja Vu. Father-son bonding via a fractured space-time continuum? Frequency. Even Quantum Leap gets a shout-out via an Easter Egg of a cameo, while Speed appears to be the model for how Stevens’ fellow passengers – yuppie asshole, bitter comedian, shifty-looking geek in a Star Wars parody T-shirt – get caught up in the unfolding drama.

It’s a measure of Jones’ burgeoning confidence that his movie never feels beholden to any influence – not least Moon, which also dealt with existential issues of identity, mortality and isolation. Take note how impressively he handles mood, most notably in a finale that sees him deftly juggle tense confrontations, playful humour and a rueful sadness.

Monaghan’s natural vivacity lets her character come to life in a way Andie MacDowell never could in Groundhog Day, while Vera Farmiga (in a performance of close-ups) is ace as the mission controller whose frosty veneer gradually melts to reveal a heartfelt empathy for Colter’s plight. But ultimately this is Gyllenhaal’s film, the Brokeback star bringing a manic edge to Stevens’ heroics that may have eluded a more conventional leading man.

Stubborn, insubordinate and occasionally downright dumb, he’s no rock-jawed hunk but a flawed, scared grunt in over his head. Nor is he especially observant, repeatedly missing clues and suspects more perceptive viewers will peg from the get-go. Admittedly that’s something of a failing in Ben Ripley’s otherwise well-oiled script.

Yet the real liability is Wright, whose panto-stylee, oddly accented turn as the code’s crutch-reliant deviser is at odds with the film’s intricate hyper-reality. If Jones is to realise all his promise, he’ll have to learn how to rein in such flagrant grandstanding.

Wright may be wrong, but he’s the only thing that is in a film which offers sophisticated entertainment, kinetic jolts and some very big bangs. Not only that, but it also presents a compelling argument for never stepping off a moving locomotive...