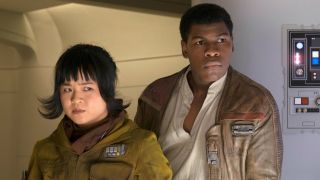 Star Wars: The Last Jedi's writer and director, Rian Johnson, had some strong words for those who participated in the backlash against the film's the diverse cast of characters: "Fuck 'em." As reported by WIRED, Johnson was crystal clear on his feelings about a certain section of detractors at the WIRED25 conference on November 9, where the filmmaker, along with Chris Evans, sat down to screen Knives Out.

Even though Star Wars: The Rise of Skywalker is just over a month away from hitting theaters, we're still talking about Star Wars: The Last Jedi. That's mostly because the diverse cast – which included Oscar Issac as Poe Dameron, John Boyega as Finn, and Kelly Marie Tran as Rose Tico – garnered some negative reactions for the worst reasons from the worst of the Star Wars fandom. They review-bombed the audience score on Rotten Tomatoes (it's still at 44%), harassed Kelly Marie Tran on social media, and even created a Change.org petition to stop Johnson from working on his own Star Wars trilogy.

Johnson's exact quote was: "If someone is responding to diversity negatively, fuck 'em." He clarified that this kind of fighting over Star Wars' content is what comes with the territory, and that maybe some people didn't like the movie for other, more legitimate reasons. "Ninety-five percent of my interactions on Twitter are absolutely lovely and constructive and wonderful with Star Wars Fans," Johnson said at the conference, "I think the fandom has to take a stand against getting defined by a very small slice of it that does not represent the lion's share."

It will be interesting to see the reactions to the final story in the saga when Star Wars: The Rise of Skywalker debuts on December 20, 2019.

I sense a great disturbance in prices coming up...Oh yeah it's Black Friday. Check out all of our Black Friday game deals.