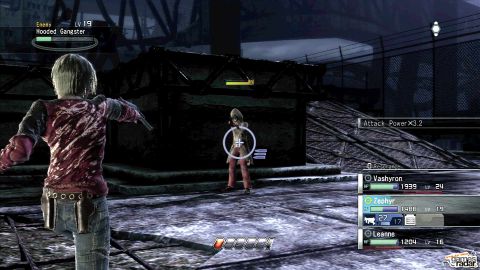 Progress through the game is split into chapters, each a self-contained chunk of game with one story mission and a handful of side-quests to pad it out. As a band of roving Hunters you need to check a note board for requests which will then point you in the direction of the person needing help. All of the chapter’s side-quests are listed here making it an idea with little elegance and few surprises. But it’s a welcome addition all the same: the compartmentalised approach is a great litmus test for judging how underpowered your team is and you always have the option of stopping the next chapter from kicking in until you’re ready for it. The neatness of the clockwork theme that permeates the world being applied to the mission progress wasn’t lost on us.

Alas the praise must, temporarily at least, come to a halt round about here. Despite its successes there are still plenty of problems nibbling away at the shiny edifice of Resonance of Fate. The underlying story lacks meaningful cohesion; loading transitions between areas are too frequent and too long; features such as the Fight Arena and costume customisation are implemented in ways which make them completely extraneous and the dungeon designs are frequently bland and ugly, especially after seeing the inspired designs of Ebel City and its sister towns.

But the biggest problem by far is a simple balancing issue. The game is ‘difficult’ in a way that would make any masochist grin like crazy, and if you’ve not been grinding like a millstone you’ll find bosses impossibly tough. When our party was temporarily reduced to two members we were told about dual-wielding. Maddeningly, neither of the remaining characters was able to shoulder the weight of two weapons simultaneously. The Hero Gauge bezels are in ridiculously short supply (we’d gathered six by the seventeenth hour of play, which felt like the acceptable minimum) and if a battle starts to slip away from you there’s absolutely no way back on top, short of retrying the entire confrontation again. All these problems are basic slider issues, rectifiable by tweaking the code a tiny bit. A little more experience here, a little more health there would have solved it.

Be careful not to mistake this unfairness with inept tactics, though. One boss felt particularly overpowered until we mixed up our tactics – declining to control anybody but Zephyr who eventually amassed enough scratch damage for us to finish the Big Bad off with a single handgun shot. That you’re left to your own devices to discover these tricks is a massive oversight but the game doesn’t deserve to be punished for simply neglecting to teach you correctly. You can thank us however you like – the tip above will see you through plenty of battles you’d otherwise struggle to complete. But post-launch we also expect to see forums discussing the best ways of taking individual enemies down. The silver lining? Discoveries like these emphasise how much hidden depth there is to the game.

Without the crowd-pleasing production values of its Square-made competitor, Resonance of Fate will be a tough sell to newcomers. Perhaps it’s for the best. Unless you’re familiar with the genre, Final Fantasy XIII, such as it is, probably remains the better representation of a traditional JRPG: an easier game to sink into, bolstered by thousands of man hours of gloss and a story with some pace behind it.

And yet, if you’re serious about diving into an RPG and are prepared to push beyond its abrasive features and discover the potential locked inside, Resonance of Fate will prove to be the sensible choice. Its clumsily paced cutscenes still manage to flesh out more likeable, funnier characters than Final Fantasy XIII does, even with its Hollywood production values, and there’s definitely a whole lot more to keep JRPG old-timers enthralled.

Surrender to Resonance of Fate and it’s unlikely you’ll wish for all those precious weeks back.

Matt is former editor of Official PlayStation Magazine, his favourite games include Skyrim, Final Fantasy VII, Braid, Shadow Of The Colossus and Puggsy, and when he's not grinding away in Destiny you'll often find him talking about WWE or NFL (go Seahawks!).