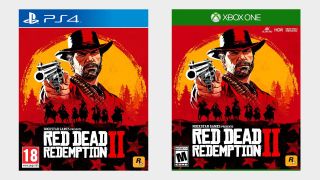 There's been some mega savings to be had for some Cyber Monday gaming deals, but Rockstar's groundbreaking Red Dead Redemption for $24.99/£24.99 on PS4 and Xbox One is one of the standouts.

Rockstar's cowboy epic is one of the most ambitious open worlds that we've seen this generation, with the story of Arthur Morgan taking us on an odyssey through a transforming America. More importantly, you can watch our boy Arthur grow a proper shaggy beard in it.

If you're one of our US readers, you'll want to point your horse in the direction of Best Buy, where you can save a whopping $35 on Red Dead Redemption 2, or Walmart, where it's currently half price at $30.

If you're in the UK, there are few more options for you to get your hands on Arthur Morgan's adventure. Argos are stocking it for £24.99, while Amazon and Game have it for £27.99 with additional extras. These are an exclusive steelbook at Amazon and 25 Gold Bars for Red Dead Online at Game. There's plenty more games

If you (correctly) think that Red Dead Redemption 2 would look better on a swanky new TV, why not have a browse through our Cyber Monday TV deals