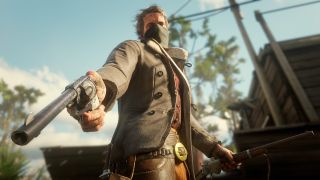 The next big Red Dead Online beta update will alter the game's approach to PvP and griefing, something that Rockstar has been grappling/lassoing with since the game went live in November. A new system that accounts for who attacked who when determining enemies and bounties, and another that lets players set themselves apart from folks whose PvP playstyle they don't share, is set to arrive in spring along with new missions and modes.

The Bounty System that Rockstar added back in February imposes increasingly steep bounties on players that attack other players. The problem, as any participants in a schoolyard scuffle would tell you, is that it doesn't really care who started it. That will change when Rockstar enables the Hostility System. For instance, if a player attacks another player, the one Who Started It will be marked as the victim's enemy, but not vice versa. Then the victim can defend themselves by returning fire without getting a bounty on their head.

Rockstar says participating in dedicated matches and Free Roam Events won't get you marked as hostile. There are more subtleties to the Hostility System that the studio isn't going into yet, as well, so we'll have to wait and see how it works in a live environment.

You can still get shot and be shot at through free aim, but Defensive players don't deal or take increased damage from headshots. You'll even be immune from getting lassoed by other players. Lassoing somebody yourself will pop you straight into Offensive with a big hostility increase for trying to be all clever and game the system. With that said, I'm sure people will still totally game this system.

The update will come with some new playable content as well, including more missions in the main Land of Opportunities line, more Free Roam Mission NPCs and types (with some teased Red Dead Online cameos from Red Dead Redemption 2 characters), and the advent of dynamic world events like ambushes and rescues. Look forward to tweaked Daily Challenges that no longer encourage hostile Free Roam gameplay and bigger reward streaks as well.

Make sure you get ready for the dawn of a new day in the old west with our Red Dead Online guide. Or stay right here and enjoy watching us make a cantankerous weirdo with the character creator.