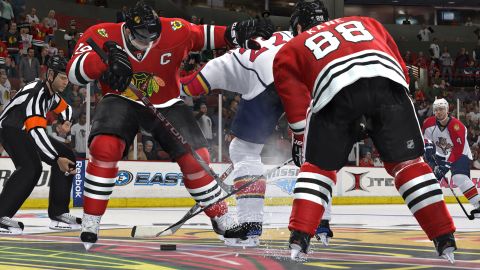 Watching a dynasty play at its peak is an amazing thing. During Gretzky’s heyday, his star-studded Edmonton Oilers went on championship rampages that were as much spectacle as sport, scoring goals at shocking rates and demolishing all in their path. EA’s current hockey franchise is operating on that same virtual plane. NHL 11 is a sublime symphony of pucks, checks, fights, and goals that’s so good its competition has gone into hiding.

It’s no surprise to anyone that’s been paying attention the past few seasons that NHL 11 is spectacular, as EA’s hockey game has been at the top of every sports gamer’s “best of” list for awhile now. The action on the ice has been fine-tuned to near perfection, sporting silky-smooth movement, immersive sound, and a seemingly endless supply of “oh cool!” moments. We scored overtime goals on pucks chopped at in mid-air, got chased after by stick-swinging opponents when we took cheap shots at prone defenders, and saw our goaltender desperately twist and spin to grab a puck that’d gotten behind him. No game ever felt exactly the same.

It’s also the least “video gamey” of the series, as we’ve discovered no guaranteed goal money moves yet. Even the most tried-and-true methods – such as skating in from the wing, stopping, then tossing the puck through the slot to a waiting forward on the other side of the net – get broken up by smart defenders almost all the time. In fact, you’ll likely suffer through plenty of scoring droughts; we sure did. You’ll work harder than ever to put the puck in the back of the net, but when you do, the satisfaction will be massive.

While the guts of the game received some polish and new additions, vets of the series will be instantly familiar with the action. That’s probably why EA decided to take the authenticity up a notch, adding in a bunch of the Canadian Junior teams and players that will appeal to the hardcore hockey fanatics like no video game has ever done. Now, whether you’re in GM mode, Be A Pro, or the all-new Ultimate Team, you’ll be dealing with an entirely new level of depth and realism with the NHL’s feeder systems. It’s truly nirvana for puckheads that know their stuff.

Speaking of the Ultimate Team, it’s a wildly deep online franchise/team-building/card-trading science experiment that has a unique appeal – some will love it and others will be baffled. Similar to (but much deeper than) the Ultimate Teams in FIFA and Madden, you create a team to participate in monthly online tournaments, constantly making adjustments to the lineup to find the best combinations. It’s massive, time-intensive, and extremely competitive, so be prepared if you’re planning on diving in.

NHL 11 continues to dominate the sports landscape. It’s a no-brainer must-have for any modern sports gamer, whether you can successfully discuss the nuances of the Left Wing Lock or can barely name a couple of players on your favorite team. There’s enough here for everyone to have a blast.