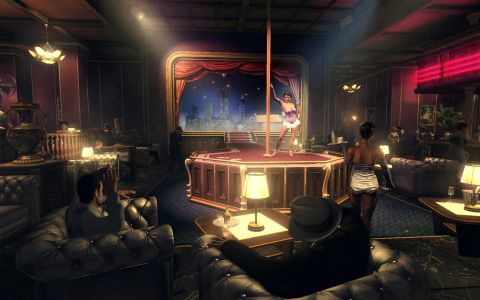 That just leaves the one constant in nearly every open-world game: the cops. Cops in the original Mafia game were an enormous pain in the ass; they’d pull you over for speeding or running red lights, and God help you if they actually saw you commit a crime. In Mafia II, meanwhile, they’ll still try to pull you over for speeding (but not running red lights). But that’s OK, because the cops themselves are kind of a joke, easy to outrun and even easier to outwit.

Even if they manage to catch you, well, two things you’ll learn from breaking the law in Mafia II are that all police officers are corrupt, and money fixes everything. Everything. Even if the police manage to “arrest” you, bribing them a few hundred on the spot will instantly set you free and clear your record. And if they decide they’d rather just shoot you on sight, as they will if you rob stores or commit murder, all you need to do is kill all the cops in your immediate vicinity (more won’t usually be sent after you right away) and then steer clear of the rest long enough to change your clothes, at which point they won’t recognize you at all anymore. They might still recognize whatever car you were driving, since vehicles have a separate “wanted” status, but hey, that’s what Empire Bay’s many illicit body shops are for.

Really, though, the focus here is less on action than it is on story – and Mafia II’s story is relentlessly entertaining, filled with interesting characters and carefully laid plans that routinely go horribly wrong. Following the misadventures of one Vito Scaletta, a two-bit hood-turned-war hero-turned-mafioso, the game spins a blood-soaked 1950s crime yarn that sees Vito and his loutish buddy, Joe Barbaro, struggling to carve out a niche for themselves in the New York/San Francisco-inspired city of Empire Bay.

Vito starts the game in abject poverty, but gradually claws his way up to mediocrity before doing some time in prison. He gains and loses increasingly posh homes and possessions, kills a lot of people he shouldn’t, and is ultimately forced to weigh loyalty to his family against loyalty to his other family.

What sets all this apart from most other Mob games is Vito’s enduring bromance with Joe, a likable slob who speaks with a Jersey accent, busts out a lot of Italian slang and seems to genuinely care about Vito. Vito, for his part, is a typically earnest (if somewhat greedy and homicidal) everyman for players to project themselves onto, but Joe is flawed, goofy, sometimes tragic and (most importantly) indestructible, which makes him a much more interesting character to hang around with. It’s hard not to get attached to him – or to any of the other charmingly devious rat-bastards who move in the circles Vito and Joe so desperately want access to.

Above: That includes Henry Tomasino, the gravel-voiced, on-again-off-again third member of the group

Couple all that with some amazing vocal performances, a ton of snappy dialogue and some expertly directed cutscenes, and you’ve got a genuinely heartfelt, interesting story to follow. Sure, it may borrow heavily from Goodfellas, The Godfather and even the original Mafia game, but that doesn’t make it any less engaging.

One word of warning, though: Mafia dudes are generally portrayed as racist pricks, and that goes quadruple for Mafia dudes living in the ‘40s. It’s actually kind of refreshing that Mafia II doesn’t gloss this aspect over, but if you’re the type to get easily upset over protagonists who casually sling around racial slurs, well, consider yourself warned. It’s not a huge part of the game, but it’s there.

At the center all this is what might be both Mafia II’s biggest asset and its biggest liability: the city of Empire Bay itself. Over the last few years, we’ve heard a lot about the amount of effort that’s gone into painstakingly recapturing the look and feel of the ‘40s and ‘50s, and that genuinely shows in everything from the car designs and fashions to the neon shop signs and the furniture, appliances and posters that decorate every building interior. Everything looks amazing – more so when you factor in the occasional rain and snow that cover the streets – and it’s difficult to not be impressed.

Above: It's worth noting that while your friends can lean out of the car and shoot, you can't shoot while driving, ever

It’s not limited to the sights, either. Empire Bay is also host to (just) three radio stations, which play a staggering selection of jazz, ‘50s rock, blues and classical music, along with original (and almost totally straight-faced) commercials and news reports that track your misdeeds. A word of warning, though: the radio stations, varied though their playlists might be, can get awfully damn repetitive, and the songs themselves are awfully damn catchy. So try to switch up what you listen to, or you might end up with a faintly racist song about Chinese food, sung by a band called The Gaylords (yes, really), stuck in your head for days at a time.

Ultimately, though, Empire Bay feels strangely lifeless,all careful detail and little spontaneity. The crowds are thin, the traffic is light and – most importantly – there’s very little to actually do in Empire Bay. Apart from the missions mandated by the story, there aren’t any side-tasks to pursue apart from stealing cars, robbing stores or scouring the city for collectibles. Oh sure, every once in a while you’ll find a woman who needs her car fixed or some guy who needs a punch in the mouth, but that stuff’s rare, and it's always a pre-planned part of whatever mission you're on. There’s no real incentive to explore; nothing to spend money on but clothes, guns, car upgrades and bribes; and no reason to ferret out collectibles aside from seeing vintage Playboy centerfolds and earning an eventual Achievement or Trophy.

Above: Still, though – pretty

None of that stuff is particularly interesting or necessary, and it leaves us disappointed to find out that Empire Bay’s impressive aesthetic achievement isn’t much deeper than Grand Theft Auto III’s version of Liberty City. It’s like a photo come to life; it’s very pretty and evocative of its era, but if you expect much more from it than that, you’re going to be let down.

It also doesn't help that,while you’ll occasionally see ordinary citizens walk up and engage each other in conversation, these chats always seem stiff and tacked on. It’s also not uncommon for them to beentirely voiced by ubiquitous voice actor Nolan North. The illusion is cracked even further by weird design decisions, like characters who show up in cutscenes with speaking parts, and then turn out to be standard NPC models – which can be jarring if you’re not prepared for it. Probably the most notable example is Joe’s nameless, redheaded “girlfriend,” who shows up in cutscenes…

… outside Joe’s apartment, needing to be saved from some dumb greaser…

… and, frequently, on the street next to clones of herself.

Above: Not an unusual occurrence

It's important to note that, as disappointingly shallowas Empire Bay is as an open world, it likely won't affect your enjoyment of the story and action, which stand well enough on their own. So long as you think of Mafia II as a linear game that just happens to be set in a freely explorable landscape, it'sstill a pretty amazing experience.