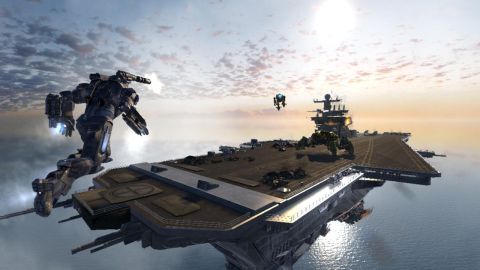 It’s difficult to imagine Tony Stark, genius tech-development maverick and everyone’s favorite man of iron, endorsing a version of his “biography” on the Wii. With the Wii’s track record of patchwork controls and second-tier graphics, we imagine Mr. Stark would demand a higher end console to host his life’s story, perhaps even one he designed himself.

In this case, his instincts would be right.

Of course, Tony would probably also prefer a game that was engrossing and fun; let’s be clear, Iron Man 2 for the Wii is not that game. While the motion controls are passable, and only occasionally interfere in a game-breaking way, they’re just another attempt by a Wii developer to get close to the functionality of a standard controller. There’s nothing interesting or unique about the way this game handles, and the entire time we played our eyes kept straying longingly towards the 360 controller perched on our coffee table, temptingly within reach.

The graphics don’t do it any favors, either. Yes, it’s a Wii game. No, that does not mean it has to look like a game that was released in 1998. Instead of seizing the opportunity to create a stylized comic book aesthetic, the developers were satisfied making a lower-res version of the game that released on the other consoles. While the character models look decent, the environments are reminiscent of the way the world looked that time you got black-out drunk and ran head-first into a brick wall. There are enough jagged edges here to make a Saw sequel, and the weapons effects and explosions are straight out of third grade art class.

The shoddy, “Look what grandma made!” production values are most evident in the cutscenes, the majority of which feature two grainy photos of the film’s actors talking at each other. And we do mean at; if any of these voice actors were in the same room while the dialogue was being recorded, we’d be shocked. Our initial excitement on hearing that Sammy L, Don Cheadle, and a handful of others would reprise their roles from the film was quickly blunted when we were treated to the first stiff, phoned-in dialogue.

The narrative doesn’t do the cutscenes any favors, either. While the premise is competently crafted (by comics vet Matt Fraction), any narrative impact is blown by bad acting and terrible pacing. Major events in the plot are often distilled to a single image over which some disinterested actor shouts nonsense, and while Fraction does an admirable job trying to capture some of Tony Stark’s womanizing personality, his attempts at humor are crushed by the awkward delivery of Robert Downey Jr. sound-alike Eric Loomis.

The gameplay consists of walking or flying forward along a tight, linear path, occasionally pausing to shoot things until they explode. Where the flying levels should add an element of diversity, instead they’re almost indistinguishable from the ground-based levels except that you can’t control how quickly you move. At least you’re not backtracking through the same bland areas or trying to follow a vague and often misleading waypoint system - frequent occurrences while on foot.

The part where you shoot things, the reason you’re playing this game in the first place, is marred by an awful targeting system (which you’re better off not using) and a scan mode that alternates between useless and actively annoying. Though the game gives you the option to upgrade your sensors and add weaponry and extra armor, most of the “power-ups” are essentially just unlocks that you have to exchange for the equally effective weapons you already have.

The saddest part about playing Iron Man 2 is that there are moments when you catch a glimpse of how, with sufficient time and resources, the developers could’ve crafted a compelling experience. Open this world out, give the narrative space to breathe, and the empowering fantasy of being a human being inside an armored suit of military-grade hyper-tech does the rest. Even with just a few more coats of polish, this game would’ve been a viable XBLA or PSN release. Sadly, in its current state and as a full retail release, it’s just rusted junk.