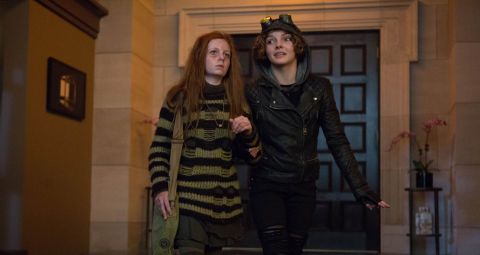 The problem for Gotham’s first episode set primarily in one of Bat-mythology’s most famous icons – Arkham Asylum – was always going to be living up to expectations. In and of itself, “Rogue’s Gallery” is perfectly fine example of the show; you just can’t help wishing it were packed with a few more Easter Eggs – hints of villains and characters to come.

Not that the place isn’t dark and unhinged enough. The montage sequence with Gordon interviewing inmates to discover who has the missing key treads a fine line between black comedy and repulsion; or, to look at it from another angle, between asking us to laugh at or be shocked by the mentally afflicted. It’s not PC, but it is disturbing.

The episode also benefits from two very strong central villains. Neither Gruber – with his sing-song delivery and starey eyes – or Danzig – with his almost pathetic expression of confusion – are on screen much, but they have a disproportionate impact.

For once, though, the villains don’t totally outshine our formerly Easter Island-esque hero. Ben McKenzie’s Gordon has been loosening up pleasingly ever since the seismic-aftereffects of “Penguin’s Umbrella” (the split from Barbara has done him the world of good too) and here he proves to be the charismatic, multi-layered, more appealingly vulnerable lead the show’s always needed. The blindly moralistic bluster remains but is smoothed out by some self-effacing humour and wider range of expressions than we've seen previously (he’s up to about five now).

He’s helped enormously by the arrival of Morena Baccarin as Dr Thompkins. It’s refreshing to see her playing against type; instead of the usual cool, aloof, controlling femme fatale roles she plays, here she’s pretty much a regular, charming doctor. Thompkins may have a hidden agenda, but it’d be nice to think not. She certainly has an instant chemistry with Gordon; as inmate Royston says at one point, “Get a room!”

During the prison riot you can distinctly hear a very unique laugh, which sounds like a Gremlin on helium. Could it be… the Joker?

Bullock is also on top form. The show is so much more fun now that Gordon and Bullock have a more trusting working relationship. All that bickering in the early days was a little bit contrived at times.

So the main plot is Gotham as we’ve come to like it: twisted, whimsical and a little bit freaky, aided by some rich and moody production design and lighting and lean, pacy direction.

Elsewhere, “the” Penguin’s failed attempts at extortion seem like a minor distraction, although for once Maroni comes across as a force to be reckoned with and not just like some jolly, rotund Italian restauranteur. He also gives us a wonderful definition of hubris (see below), while Gabe’s lack of bonsai knowledge is a fun moment.

The Fish/Butch/Jimmy storyline never quite kicks into gear. It’s difficult to care enough about Butch’s loyalties to justify a conversation about beefsteak that seems to go for days, and the scripting sleight-of-hand necessary to keep us guessing until he finally pulls the trigger may have been more effective if the episode hadn’t already played a similar game of “which female is lying to Gordon?” just minutes earlier.

Renee’s split from Barbara, meanwhile, feels very sudden. Okay, we wouldn’t normally call for more Barbara scenes (shudder) but we’ve seen little evidence of the drug- and alcohol-fuelled spiral of descent that Renee claims she’s in. Admittedly, we’ve rarely seen her without a vase of wine in her hand, but she’s not exactly been acting like Oliver Reed on a chat show.

No Bruce this week, which is no real problem except that we don’t get any Alfred (and his colourful language) either. But it’s a measure of how far this show has come that it can make a bona fide success out of a Gordon-centric episode.

Bullock: “Hey fella.” Royston: “In a cowslip's bell I lie, there I couch when owls do cry.” Bullock: “Alright, I can dig that.”

Definition of the week

Jack Gruber (played by Sanctuary’s Christopher – John Druitt/Bigfoot – Heyerdahl) is not the name of any villain from the DC universe, but many pundits are speculating that he’s Gotham’s version of the Electrocutioner, for obvious reasons (more on this in the next review). He leaves Gotham in partnership with Aaron Danig, who seems to be the TV show’s version of Aaron Helzinger, a villain from the comics known as Amygdala, who’s lacking the part of his brain that controls his emotions.

As well as the usual low angles that Gotham loves, there are also very few shots in this episodes aren’t skewed in some way.

The Play's The Thing

The play being performed by the inmates at the beginning of the episode is The Tempest. Royston is playing the angel Ariel, and the song he sings over the montage is from the play. The words are: “Full fathom five thy father lies, Of his bones are coral made, Those are pearls that were his eyes, Nothing of him that doth fade, But doth suffer a sea-change. Into something rich and strange.” Later, when Royston’s brain is fried, all his lines are lines said by Ariel in The Tempest.

A few episode reviews ago (1.07 “Penguin’s Umbrella”) we said that the doctor in the episode, played by Mekia Cox, was the comic character Dr Leslie Thompkins. She was credited that way in official pre publicity material, but never named on screen. But here we have Morena (Firefly/V/The Mentalist) Baccarin playing Dr Leslie Thompkins, this time named in the script. It’s not just the same character recast, though, as this Leslie Thompkins hasn’t met Gordon before. So clearly there was a behind-the-scenes rethink. Morena Baccarin will return in future episodes.

The track playing during Gordon’s interviews with the inmates when he’s trying to discover who has the keys is "Figure it Out" by Royal Blood. The song at the very end when Butch shoots Jimmy is “It's All in the Game” by Tommy Edwards. Very different musical genres but similar themes.

Gotham airs on Monday nights on Channel 5 in the UK, and on Fox in the US.